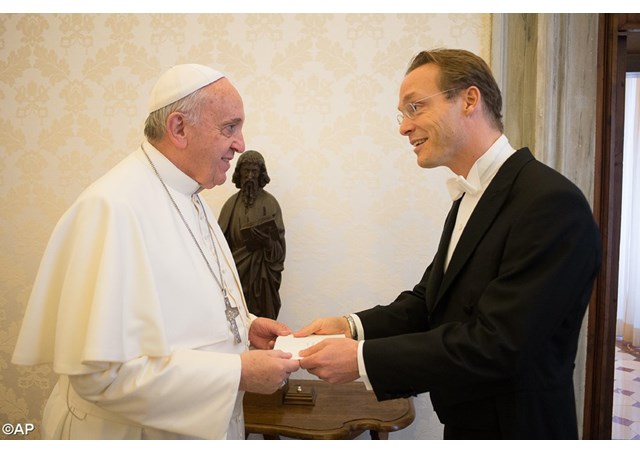 (Vatican Radio) His Royal Highness Jaime de Bourbon de Parme is the new Ambassador of the Kingdom of the Netherlands to the Holy See.

He presented his Letters of Credence to Pope Francis on Saturday morning in the Vatican and spent time discussing a series of issues of mutual concern including peace, the environment and Cuba.

Speaking to Vatican Radio’s Sean-Patrick Lovett straight after that encounter, the Ambassador highlighted his wish to continue his work in building peace economies.

His Highness explains that diplomacy and conflict management have been very much part of his life up until this moment.

He tells of his work in conflict zones doing peace negotiations in Afghanistan, in Iraq and in African countries like Congo.

Conflict management, he says, is also in his genes. His grandfather, Xavier Bourbon de Parme, fought in the 1st World War, the Spanish civil war, and for the Resistance during World War II. He was confined in a concentration camp - and survived.

For generations his family has been marked by a history of war and a longing for peace, a longing he carries with him today

“Coming to the Vatican is a culmination of my experience”, he says. The Ambassador has a wealth of  field experience which includes international work with aid organizations, think tanks and businesses, always within the perspective of finding solutions and creating peace economies. Which is why he values the opportunites offered by his new role: "I have never worked with value-based organizations", he says. "The biggest value-based organization in the world is the Holy See, and that is what brings me here today”.

His Highness also talks about a series of documentaries he made called “Africa: War is Business" which took him to the Congo, Sierra Leone and Liberia. Experiencing conflict close up left an indelible impression on him: “I lost 22 colleagues in a bomb attack in Iraq. First you feel incredible anger and only months later, sorrow. So just imagine what the people who live in war zones feel… What if you live in Iraq and your own family is under fire? The experience created a sense of compassion and comprehension for what happens in war zones”.

In Congo he saw first-hand the relationship between economy and conflict: “There are specific mines in Kivu that provide the war lords with an income and the money to buy weapons. But who buys these minerals? We all do. Indirectly we all contribute to the war in Congo. Once I realized that, with a group of industry, we managed to create a peace economy in Eastern Congo”.

The Ambassador also describes his meeting with Pope Francis in the Vatican. He says they spoke at length in Spanish, his father’s language, about peace and the latest developments regarding Cuba.

“One of the things I asked the Pope was why it was possible now. He said: ‘Well, they wanted peace but they couldn’t find each other so they needed a bridge'. And so the Pope played the role of a bridge in the peace talks in Cuba…”

And that, in synthesis, is how His Highness Jaime de Bourbon de Parme sees his own role as the Netherland's new Ambassador: a bridge between the government and people of his country and the "value-based, faith-based organization" that is the Holy See.