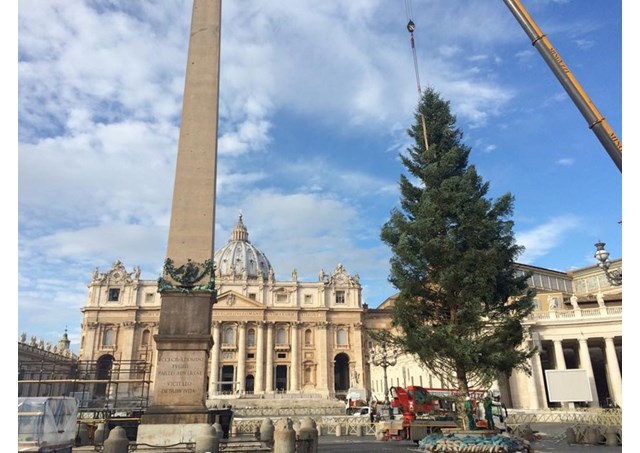 (Vatican Radio) Pilgrims visiting St Peter’s square during these final weeks of Advent can begin to enjoy a little reminder of Christmas at home, with the lighting up of the Vatican’s Christmas tree and the unveiling of the Nativity Scene on the evening of Friday 19th of December.

For many years the tradition of putting up a Christmas tree was hardly followed in Italy, but in 1982 Pope John Paul II had a tree put up in the square, bringing the Polish tradition firmly into the Vatican. Since then, many different countries and regions of Europe have taken turns in donating a tree to the Pope.

This year’s tree, which is 70 years old, was donated by the southern Italian region of Calabria, which Pope Francis visited in June of this year.

In his encyclical “Lumen Fidei” Pope Francis used the image of the branches of a tree to illustrate the spreading of faith out from God into the world.

The tree stands 25.5 metres tall, weighs 8 tons and has what’s known as a twin trunk, that is to say that two separate trunks have fused together to form a single tree trunk. This feature is also used symbolically, to show that man is never alone on his journey through this life, but is always joined by the Lord.

The Nativity scene is titled “The Nativity scene in Opera,” The figurines in the scene are donated by the “Verona for the Arena” foundation, and are inspired by the famous opera productions staged in the Verona Opera Arena, especially  Gaetano Donizetti’s comic opera “The Elixir of Love.”

One hope is that the scene will help to showcase and promote Italian Opera in the world, but there’s also a more profound hope underneath.

The title play’s on the two meanings of the Italian word “opera,” which can mean either the theatre production or the verb “to work.”

So the “Nativity scene in Opera” also highlights the work that God brought about the Nativity of Jesus Christ.