Pope thanks Verona and Catanzaro for crib and tree 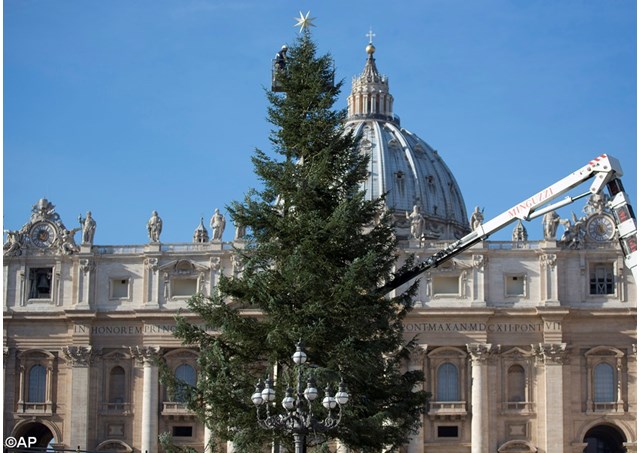 (Vatican Radio) Pope Francis met on Friday with religious and civil authorities from the Italian cities of Verona and Catanzaro to thank them for the Christmas tree and nativity scene that they donated for St Peter’s Square. The life sized crib figures, given by Verona’s Arena Foundation, and the giant fir tree from Calabria, he said, will be admired by many pilgrims coming to the Vatican from all corners of the globe. Philippa Hitchen reports:

Christmas trees and Nativity scenes touch the hearts of all people with their message of light, hope and love, Pope Francis said. These symbols of Christmas, he continued, have permeated and enriched the culture, literature, music and art of the different Italian regions and remain an important heritage to hand on to future generations. Drawing inspiration from its operatic tradition, staged in the city’s famous amphitheatre, the nativity figures from Verona were originally created for a performance of Donizetti’s two act opera ‘The Elixir of Love’.

Both the crib scene and the tree, Pope Francis said, recall the mystery of the Incarnation and the light that Jesus brought into our world. But they also touch the hearts of those who don’t believe in God because they speak of fraternity, intimacy and friendship, calling us to rediscover the beauty of simplicity, sharing and solidarity.

These Christmas symbols are an invitation to unity and peace, the Pope said, urging us to find room in our lives for God, who does not try to impose himself with arrogance, but rather offers us his love through the fragile figure of a new born baby.