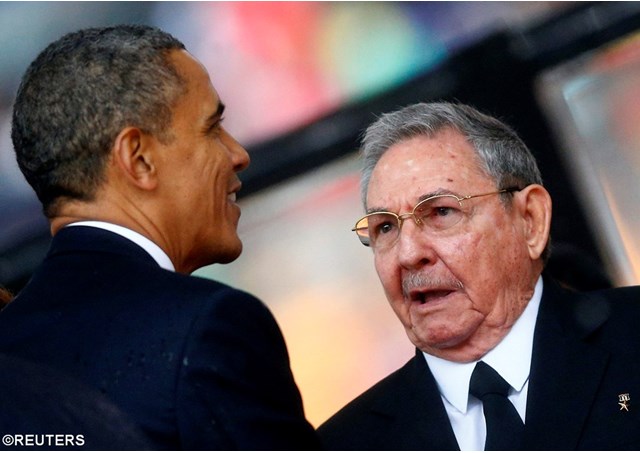 (Vatican Radio) After more than a half-century of hostility, the United States and Cuba are to work toward the establishment of full diplomatic relations – and US President Barack Obama says that Pope Francis played an instrumental role in creating the conditions for the development.

The Secretariat of State of the Holy See issued a statement offering Pope Francis’ expressions of  “warm congratulations for the historic decision taken by the Governments of the United States of America and Cuba to establish diplomatic relations, with the aim of overcoming, in the interest of the citizens of both countries, the difficulties which have marked their recent history.”

The announcement of efforts to normalize relations came in the context of the release of US aid worker Alan Gross and an exchange of intelligence officers being detained on the island and in the US.

US President Barack Obama said that Pope Francis played a role in bringing him and Cuban leader Raul Castro together.  “His Holiness Pope Francis issued a personal appeal to me, and to Cuba’s President Raul Castro, urging us to resolve Alan’s case, and to address Cuba’s interest in the release of three Cuban agents who have been jailed in the United States for over 15 years,” Obama said.

Raul Castro also welcomed the exchange and the move to normalize relations. “[President] Obama’s decision,” said Castro, “deserves the respect and acknowledgment of our people.”

Relations between Cuba and the US deteriorated rapidly and eventually disintegrated entirely in the wake of the takeover of the island by Communist revolutionaries led by current Cuban president Raul Castro’s brother, Fidel, in 1959.