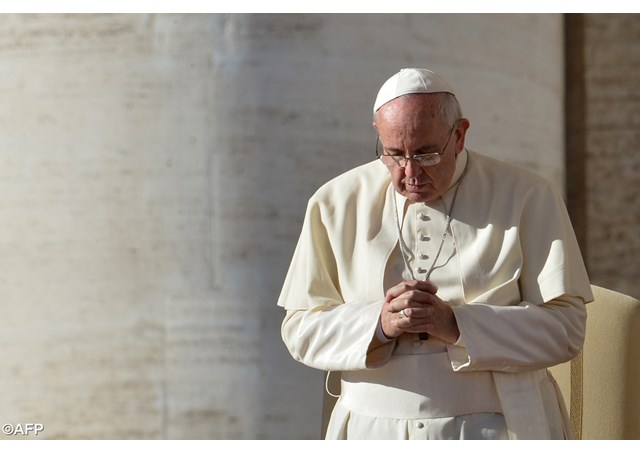 (Vatican Radio) Pope Francis has asked for prayers for the victims of the “inhuman terror attacks perpetrated in the past days in Sydney, Australia and in Peshawar, Pakistan”.

Concluding his address to pilgrims gathered in St. Peter’s Square for the weekly General Audience, the Pope asked those present to join him in his prayers to the Lord to receive the deceased in peace, to bring comfort to their families and to convert the hearts of the violent who do not hold back even before children. ”

Taliban militants in Pakistan killed at least 132 children and 9 staff members at a school in Peshawar on Tuesday, whilst an Islamist militant killed 2 people during a siege on a Café in Sydney on Monday.

The Pope’s appeal came after his second catechesis in preparation for next October’s Ordinary Synod of Bishops.

He said that the Extraordinary Synod that took place last October represented the first step of a journey which will conclude next year with another Synodal Assembly on the theme “Vocation and Mission of the Family in the Church and in the World”.

Francis said that his weekly Wednesday prayers and meditations are part of that common journey, and that is why he has chosen to reflect, this year, on the family: “this great gift of the Lord to the world, right from the beginning, when he entrusted Adam and Eve with the mission to “be fruitful, increase in number and fill the earth” (Genesis 1, 28). A gift – the Pope said – that Jesus confirmed and put his seal on in the Gospel.

And the Pope pointed out that Christmas brings much light to this mystery. The incarnation of the Son of God – he said - opens a whole new chapter in the universal history of man and woman. This new beginning – he pointed out - took place within a little family, in Nazareth.

The Son of God – he said – chose to be born into a human family in an obscure town on the periphery of the Roman Empire. Not in Rome, not in a great city, but in an almost invisible – even rough – periphery, as described by the Gospels “Nazareth, can anything good come from there?” (John 1, 46).

Perhaps, the Pope said, in many parts of the world we too use that kind of language when we hear talk of some of the urban peripheries of our own cities: “Well, that’s exactly where the most holy of stories began, that of Jesus amongst mankind!”

Jesus – he said – stayed in that periphery for over 30 years as narrated by Luke (2, 51 – 52). There is no talk of miracles or preaching, but of a very normal family life.

And Pope Francis spoke of the tenderness aroused by the descriptions of Jesus’s life as an adolescent who was raised in an atmosphere of religious devotion, learning from the words and examples of Mary and Joseph, and growing in wisdom, age and grace.

In imitation of the Holy Family, the Pope said, every Christian family must make a place for Jesus in its home, for it is through the love of such “normal” families, even in the peripheries of the world, that God’s Son quietly comes to dwell among us bringing Salvation to our world.