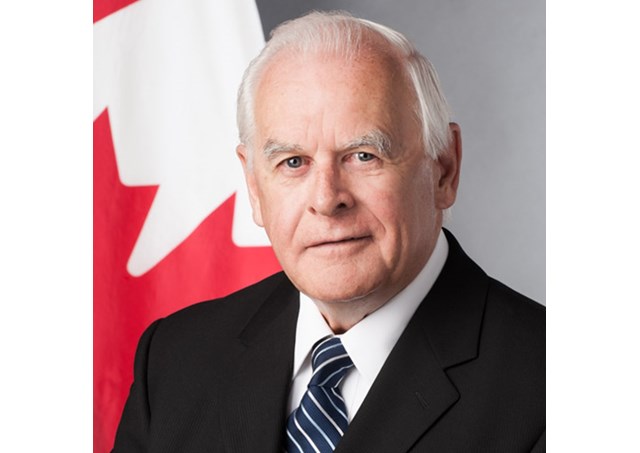 (Vatican Radio) Pope Francis received the new Canadian Ambassador to the Holy See, Dennis Savoie, on Monday. During the morning meeting, Ambassador Savoie presented the Pope with his credentials, which marked the start of the diplomat’s four-year term.

“It was a very humbling experience,” said Ambassador Savoie about his meeting with the Pope. “I felt very privileged to have been received by the Holy Father. I met a man who is very, very simple, very personable, makes you feel at ease right away. It was a very, very good meeting.”

In an interview with Vatican Radio, Ambassador Savoie said his “first priority” is to establish a network within which to identify areas for possible collaboration between Canada and the Holy See.

Listen to the interview with Ambassador Dennis Savoie:

“What I’ve already started doing in the past couple of months … is to establish a network within the area of the Holy See and government to try to, together, try to identify in what areas both countries, so to speak, could collaborate for the betterment of humanity,” he said.

The new ambassador, who fills a post that had been empty for more than a year, said he also looks forward to working with other ambassadors in Rome on issues of common concern.

“Some of them are very focused in certain areas which I’m interested in, whether it’s social justice, whether it’s immigration or religious liberties,” he said.

Ambassador Savoie was born in Tracadie, New Brunswick, one of Canada’s eastern provinces, on 9 February 1945. He and his wife of 44 years, Claudette Surette, have two children and five grandchildren.

He comes to Rome after a long and successful career in the business and nonprofit sectors, namely a 27-year career with the New Brunswick Power Corporation, where he rose to vice president, and upon retirement, four years as executive director of the New Brunswick Association of Nursing Homes.

A committed Catholic and a member of the Knights of Columbus since 1973, he later served as the Deputy Supreme Knight in New Haven, Connecticut, in the United States, from 2006 to 2013.

This is his first diplomatic assignment.

“Diplomacy for me is a brand new area and I’m sure it’s because of my involvement with the Knights that I’m here,” he told Vatican Radio. “I hope that my experience with the Knights as a …very profoundly Catholic organization, highly ethical from a business point of view… I hope that experience, knowing how the Church functions a bit, will no doubt help me.”

The ambassador also reflected on the role of faith in his work, saying he was “very fortunate” to have grown up in a “very strong Catholic family” and to have had good mentors.

One mentor in particular, while he was still a sociology student in university, had given him “three benchmarks” by which to live his life: “Whatever you do, do it with integrity and honesty. You’re integrity is not for sale, bottom line. Always aim for excellence. In other words, do the best you can at all times. And always be concerned about the human concern.”

Ambassador Savoie said he committed to these guidelines throughout his career. “They served me well over the years,” he said. “And why people believe certain things and do differently, I don’t know. It’s hard for me to understand that part.”

The ambassador said he looks forward to his four-year term at the Vatican.

“Hopefully we’ll be able to make a small difference in whatever we do to help the world,” he said.

Ambassador Savoie arrived in Rome in early October. He succeeds Anne Leahy, who had completed her term in September 2012, but who remained an additional four months. The Canadian Ambassador to Spain, Jon Allen, had taken on the additional duties of overseeing the office in the interim.