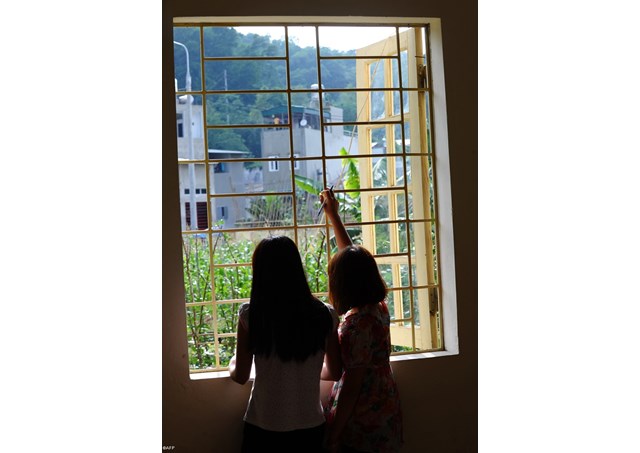 (Vatican Radio) ‘No longer slaves, but brothers and sisters’ is the theme of the 2015 World Peace Day Message which was released at a press conference in the Vatican on Wednesday. The Pope’s annual message is drawn up with the help of the Pontifical Council for Justice and Peace, but speakers at the press conference this year also included sisters who have been pioneering the Church’s battle against trafficking for the past two decades. Philippa Hitchen reports……

Sisters on the front line of the fight against modern slavery were guest speakers in the Vatican press office, sharing their personal experience of working with trafficked victims in Italy, India, Brazil, Nigeria and Costa Rica. They included Sr Gabriella Bottani, the new head of the ‘Talitha Kum’ international network of sisters against trafficking, who spoke of the particular role that Pope Francis has highlighted for women working to raise awareness of this modern form of slavery.

She noted that this year’s message stresses the need for a widespread mobilisation of all people of good will to combat this growing phenomenon, urging us not to turn away and become accomplices to the suffering of our brothers and sisters. Also giving first hand testimony of the work her sisters are doing to support victims and prosecute the traffickers was Sr Sharmi D’Souza from India.

She said the sisters go with the police on raids in the brothels and rescue the girls, for example, in one raid, she said they rescued 37 girls, of whom 11 were working as underage prostitutes. From these girls, she said, they are able to find out all the details of who the traffickers are and where they work, so that her lawyer sisters have already helped to put 30 traffickers in jail.

Sr Sharmi also appealed for the “bishops, priests and pastors” to stand with the sisters and help them in the grass roots work they’re doing in so many countries around the world.  I asked the head of the Pontifical Council for Justice and Peace, Cardinal Peter Turkson how he can encourage more Church leaders to take up this challenge?

He said the Peace Day Messages are sent via the nuncios to bishops around the world and he encouraged them to constitute study groups to respond to the call of the message. If Christmas and New Year are not a good time to do this, he said, choose another time of year – as India has done – to celebrate and raise awareness around this theme.

In particular the cardinal suggested the date of February 8th, feast day of the Sudanese slave girl, Saint Josephine Bakhita which the Church has designated a day of prayer for all victims of slavery and trafficking.

In the message Pope Francis mentions so many ways in which people continue to be enslaved and exploited today: in domestic or agricultural work, in the manufacturing or mining industry, migrants living and working in inhuman conditions, child soldiers, women forced into arranged marriages, and those trafficked for organ transplants, drug smuggling, begging or other illegal activities. As well as praising the “silent efforts” of so many religious to support and rehabilitate the victims, the Pope also calls for “a shared commitment” by States, businesses, intergovernmental organisations and individuals to “offer hope, open doors” and help combat this crime against humanity.