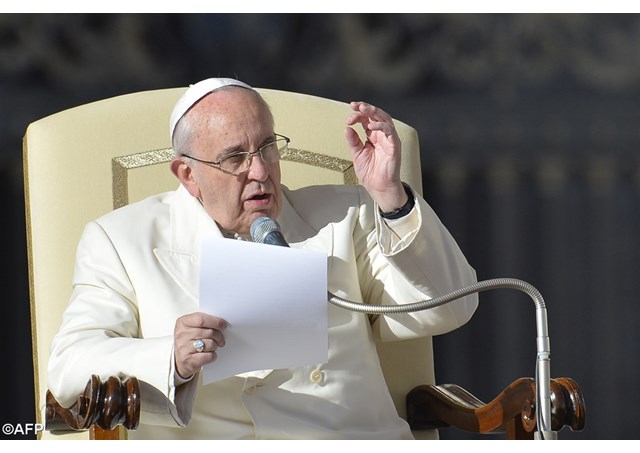 (Vatican Radio) Following a series of reflections concentrating on the Church, Pope Francis at his weekly General Audience in St Peter's Square on Wednesday opened a new Chapter, a weekly catechesis focusing on the Family.

He began this new cycle by recalling the Extraordinary Synod of Bishops on the Family which took place in October.

The Holy Father told the thousands of faithful present that he wanted to share with them what took place and what the Synod has produced.

He continued saying, that during this time there was much media attention on the work being done at the Synod and for that the Pope expressed his thanks. But, Pope Francis added,  often the vision of the media was a bit 'in the style of sports or political coverage,: “they often spoke of two teams, pro and con, conservatives and liberals, and so on.”

The Pope explained that, first of all he asked the Synod Fathers to speak frankly and courageously and to listen with humility.

He also stressed there was no prior censorship and that everyone had the chance to say what was in his heart.

The meeting, said the Holy Father began with a very frank discussion of the serious pastoral challenges affecting the Family, in the light of the fundamental truths about the sacrament of Matrimony – its indissolubility, unity, fidelity and openness to life.

The fruits of this period of discussion and discernment were collected in a preliminary report, which was then discussed in smaller groups, he said.

The observations and suggestions which emerged were incorporated in a Final Report, which served as the basis for the Final Message of the Synod Fathers.  The Pope went on to say that the Final Report is being sent to the Bishops throughout the world, and the results of this consultation will be brought to the Synod meeting next October.

The Holy Father also mentioned the fact that in preparation for the General Synod of Bishops on the Family next year the Synod Secretariat on Tuesday announced the publication of its preparatory document, known as the ‘Lineamenta’.

The synod , concluded Pope Francis, is not a parliament, but a protected space in which the Holy Spirit can work;” there was no clash between factions, but a dialogue between the Bishops, which came after a long process of preparation and now continues, for the good of the family, the Church and society. I have been asked, said the Pope, if the Synod Father’s fought? The Holy Father replied, “I don’t know about ‘fought’ but they had strong words. This is freedom, this is just the kind of freedom that there is in the Church.”

Following his Catechesis the Pope greeted English-speaking pilgrims and visitors present from Nigeria, Australia and the United States.