Pope at Audience: Fruits of pilgrimage to Turkey 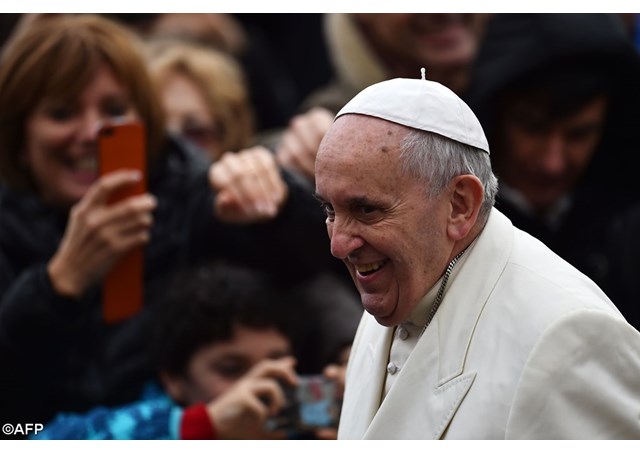 (Vatican Radio)  Pope Francis had words of praise and thanks for Turkey and the Salesian fathers of Istanbul, for all the good and “hidden” work they do for countless refugees from the Iraqi and Syrian wars.

Retracing the steps of his recent pilgrimage to Turkey during his general audience Wednesday, the Pope also highlighted the constant need for prayer on the journey towards full communion with the Orthodox Church and reiterated the importance of Christians and Muslims working together in solidarity for peace.

Rain pounded umbrellas in St. Peter’s Square Wednesday, forcing the audience to be split in two – as the Pope himself noted greeting the ‘brave’ pilgrims before him.  Before heading out among the thousands in the Square the Pope had first greeted the sick and disabled who were gathered in the Paul VI audience hall, urging them to pray to Jesus this Advent season for the strength to carry on and blessing them before he left.

After touring through the square – despite the driving rain – the Pope also invited pilgrims to greet  the sick and disabled who were following the catechesis through giant screens with applause. Then he began to speak of his three day trip to Turkey over the weekend, highlighting the ecumenical and interfaith elements of his visit.

Below please find a Vatican Radio transcript and translation of the Holy Father’s catechesis after the video:

Dear brothers and sisters, good morning. It’s not a great day is it? The weather is quite bad…but you are brave and face it anyway!  On we go! This audience is taking place in two different places, as we do when it rains: here in the square and then there are the sick in the Paul VI Hall. I met with them already, I greeted them, and they are following the audience on giant screens, because they are sick and cannot be out in the rain. Let’s greet them there with a round of applause, everyone!

Today I would like to share some things with you from my pilgrimage to Turkey from Friday to Sunday last. Today we retrace the steps of the pilgrimage I made to Turkey from Friday to Sunday last. Just as I asked you to prepare for and accompany me on that journey with prayer, today I ask you to give thanks to the Lord for its success and that it may bear fruits of dialogue in our relations with our Orthodox and Muslims brethren, as well as on the path to peace between peoples.

Firstly, I feel I must renew my gratitude to the President of the Republic, the Prime Minister, the President for Religious Affairs and other Authorities, who welcomed me with respect and guaranteed the good order of events. I fraternally thank the Bishops of the Catholic Church in Turkey, for their commitment, as well as the Ecumenical Patriarch, His Holiness Bartholomew I, for the warm welcome I received. Blessed Paul VI and John Paul II, who both went to Turkey, and John XXIII, who was Papal Delegate in that nation, protected my pilgrimage from heaven, which took place eight years after that of my predecessor Benedict XVI. That land is dear to every Christian, especially as the birthplace of the Apostle Paul, for having hosted the first seven councils, and for the presence, near Ephesus, of the "House of Virgin Mary".  Tradition tells us that the Virgin lived there, after the coming of the Holy Spirit.

On the first day of the Apostolic Trip I paid homage at the Mausoleum of Atatürk and I met the authorities of the country, which is overwhelmingly Muslim, but whose constitution establishes it as a  secular state. It is forgetfulness of God, and not His glorification, that generates violence. This is why I insisted on the importance of Christians and Muslims working together for solidarity, peace and justice, stating that each State must assure citizens and religious communities real freedom of worship.

Today, before going to greet the sick I was with a group of Christians and Muslims who were at a meeting organized by the Council for Interreligious Dialogue, under the leadership of Cardinal Tauran, and they too have expressed this desire to continue in this fraternal dialogue between Catholics, Christians and Muslims.

On the second day I visited places that are symbolic of the different faiths in Turkey. I did so, feeling in my heart an invocation to the Lord, the God of heaven and earth, the merciful Father of all humanity. The Eucharistic Celebration was the central focus of that day, which brought together in the Cathedral pastors and faithful of the various Catholic rites in Turkey. The Ecumenical Patriarch, the Armenian Patriarchal Apostolic Vicar, the Syrian Orthodox Metropolitan and representatives Protestant communities also attended. Together we invoked the Holy Spirit, He who generates unity in the Church: unity in faith, unity in charity, unity in inner cohesion. The People of God, in the richness of its traditions and articulations, is called to be guided by the Holy Spirit, in a constant attitude of openness, docility and obedience. Our journey of ecumenical dialogue is also the journey of our unity, of our Catholic Church, it is the Holy Spirit who does all the work. It’s up to us to let him do it, to welcome him and be inspired by him.

The third and final day, the Feast of Saint Andrew the Apostle, offered the ideal context to consolidate fraternal relations between the Bishop of Rome, Successor of Peter, and the Ecumenical Patriarch of Constantinople, which according to tradition is the Church founded by the Apostle Andrew, Simon Peter's brother. Together with His Holiness Bartholomew I, I renewed the mutual commitment to continue on the path towards the restoration of full communion between Catholics and Orthodox. Together we signed a Joint Declaration, a further stage on this journey. It was particularly significant that this act took place at the end of the solemn liturgy of the Feast of St. Andrew, which I attended with great joy, and which was followed by a double Blessing imparted by the Patriarch of Constantinople and by the Bishop of Rome. Indeed, prayer is the basis for any fruitful ecumenical dialogue under the guidance of the Holy Spirit, who as I said, is the one who creates unity.

My last meeting – which was both beautiful and painful - was with a group of young refugees, guests of the Salesians. It was very important for me to meet some refugees from the war zones of the Middle East, both to express to them my closeness and that of the Church, and to emphasize the value of welcoming [refugees], an area in which Turkey has also shown a great commitment. I want to thank Turkey once again for its welcoming so many refugees and sincerely thank the Salesians of Istanbul. But, these Salesian who work with refugees, they are so good! I also met other priests and a German Jesuit and others who work with refugees but that Salesian oratory of refugees is a beautiful thing, it is a hidden work. Thank you so much to all of those people who work with refugees. Let us pray for all the refugees and IDPs, and that the causes of this painful scourge be overcome.

Dear brothers and sisters, may Almighty and Merciful God continue to protect the Turkish people, their leaders and the representatives of different religions. May they build together a future of peace, so that Turkey can be a place of peaceful coexistence between different religions and cultures. We also pray that through the intercession of the Virgin Mary, the Holy Spirit will make this Apostolic Journey fruitful and favor missionary fervor in the Church, to announce to all peoples, in respect and fraternal dialogue, that the Lord Jesus is truth, peace and love. He alone is the Lord. Thank You.