A message for World AIDS Day from Caritas Internationalis 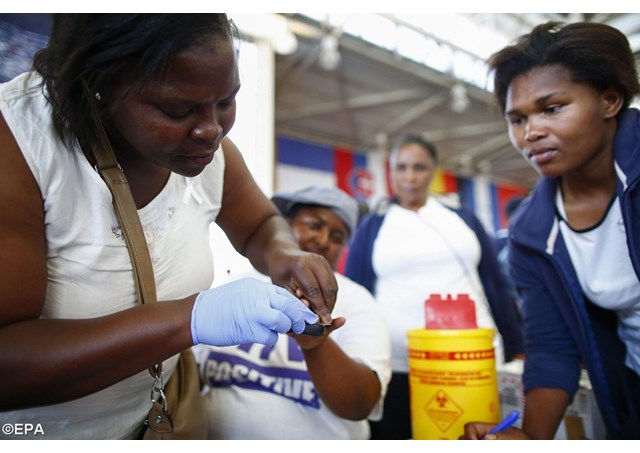 At a time when all of the world’s attention is focussed on Ebola, it is easy for the world to take its eyes off “World AIDS Day” which is commemorated annually on 1 December. Recent media reports on Ebola deaths say the number is now close to 7000. While no effort should be spared towards containing Ebola, it is important that HIV/AIDS continues to get the attention it deserves.

Globally, HIV rates are on the decline. However, according to the World Health Organisation (WHO) close to 2.1 million people are said to have been infected with HIV last year and every year about 1.6 million people die of AIDS related illnesses. WHO officials warn against the risk of complacency, particularly in Africa, which still has the highest number of HIV infections and deaths.

“A message for World AIDS Day from Caritas”

“Every person is worthy of our giving.” With these words, Pope Francis called on all Catholics, and other people of faith and good will, to open their hearts to all in need and to treat them as sisters and brothers. He then assured those willing to sacrifice their own comfort, time, wealth, knowledge and skills for the good of others, “We achieve fulfillment when we break down walls and our heart is filled with faces and names!”

The story of Caritas’ response to the HIV epidemics in different parts of the world goes beyond abstract strategies and policies, as important as they may be. Ours is a response that is measured, not only in realizing expected outcomes, but also by the greater enjoyment of human dignity among persons living with or affected by HIV. Ours is a response that reaches out with compassion and tangible support to countless widows, orphans, and other surviving loved ones as a way to honour the memory of some 39 million people who have died from AIDS-related causes during the past three decades. Ours is a response of walking with, not merely “doing for”, HIV-positive persons as they empower themselves to live fully despite the challenges they face as a result of the virus.

The international experts tell us on this World AIDS Day 2014 that we must “close the gap” between the “haves” and “have-nots” in the global response to AIDS. We can accomplish this lofty goal by opening our hearts in solidarity and in the search for the common good. We can “close the gap” by challenging and changing the structures that prevent some 25 million adults and children from access to life-saving anti-retroviral medications.

We can “close the gap” by looking beyond the “quick fix” solutions for HIV prevention that have been proposed for the last 30 years and, in the words of Pope Francis, by “going out to meet” those at risk of HIV infection “with creative love” as we “help them to rediscover their dignity and to revive those inner strengths, those personal talents” of “men and women created in the image and likeness of God.” We can “close the gap” by fully welcoming HIV-positive refugees and displaced persons who too often are denied access to health care in the countries where they have sought freedom and a more positive future for themselves and their families. We can “close the gap” when we reject “the culture of comfort, which makes us think only of ourselves, makes us insensitive to the cries of other people”

Above all, let us give priority attention to the HIV-infected children who have not benefited from the same pace of progress, as that enjoyed by adults, in making medicines available. We must continue to “close the gap” in the pediatric AIDS response by advocating with governments and pharmaceutical companies to develop more “child friendly” medicines so that we can offer these children the possibility of living beyond their first or second birthdays and so that we too can benefit from the society of tomorrow which they can help us build.

Finally, we can “close the gap” by overcoming our in-born tendencies to blame others for their conditions of poverty, of marginalization, or even of HIV infection. Universal access for all people living with HIV, not just to medicines, but to full life and dignity, will only be accomplished by rejecting all forms of discrimination and stigma toward those living with or affected by HIV. Let us base our “roadmap” for Caritas’ ongoing commitment to the global HIV response on this appeal of Pope Francis: “… we must open ourselves to the peripheries, also acknowledging that, at the margins too, even one who is cast aside and scorned by society is the object of God’s generosity. We are all called not to reduce the Kingdom of God to the confines of the “little church” — our “tiny little church” — but to enlarge the Church to the dimensions of the Kingdom of God. However, there is one condition: wedding attire must be worn, that is, charity toward God and neighbour must be shown.”