Watching the celebration of the Divine Liturgy 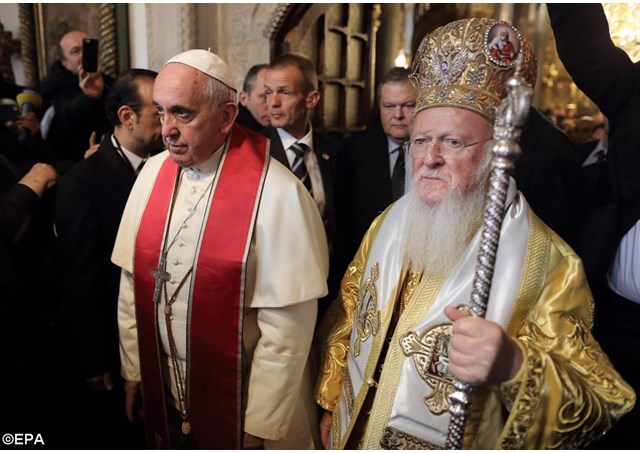 (Vatican Radio) In Istanbul on Sunday November 30th, Feast of Saint Andrew, Pope Francis took part in the Divine Liturgy celebrated by Ecumenical Patriarch Bartholomew I. Philippa Hitchen who attended the event places it into context:

Watching the celebration of the Divine Liturgy inside the Ecumenical Patriarchate in Istanbul, you could be forgiven for thinking this was just another lengthy, elaborate Orthodox liturgy, albeit an important one marking the feast of St Andrew, revered as the founder of the Church throughout the Orthodox world. You might also look at the rows of elderly men, robed in black and gold, half hidden behind the ornate icon screen and wonder what on earth this ancient liturgy has to do with the urgent problems facing Christians in this part of the world today. And you might even ask what’s the point of the Pope travelling to Turkey to meet with the Patriarch, a man he’s already encountered on three previous occasions in Rome and Jerusalem.

Speaking before the signing of a common declaration between the two Church leaders, Pope Francis answered those questions, stressing clearly what he called “the logic of personal encounter”. Theological dialogue between the experts is extremely important, he said, recalling the recent 50th anniversary of the Vatican II document on ecumenism which affirms the validity of Orthodox sacraments and the rich patrimony of all the Eastern Churches. But Christianity, the Pope said, is about a person-to-person experience which changes the way we view the world and treat other people. Just like Andrew, the Galilean fisherman, who was so touched by his personal encounter with Jesus, he wanted to share that joy with his brother Peter at the start of our Christian story.

But Sunday’s celebration wasn’t just about the warm embrace between the Pope and Patriarch either. They already see eye-to-eye on the urgency of a new, united Christian witness to the world. Pope Francis also said he also wanted to assure each one of the Orthodox bishops in attendance from different parts of the world that the Catholic Church does not intend to impose any conditions on the search for unity, other than a shared profession of faith. In the delicate relationships with other Orthodox leaders, let’s hope those words can help to increase the trust needed to make some concrete steps forward.

If you’re wondering why we should care about these rather specialised problems of promoting unity between the divided Churches, the Pope answered that question too, saying people are crying out for a genuine Christian witness to the values upon which our faith is founded. Those people include the poor, the hungry, the unemployed, who look to the Church to defend their dignity and uphold their rights. They include all the victims of conflicts, whose cry urges us to move quickly along the path of reconciliation. How can we credibly proclaim a message of peace, he asked, if there continues to be rivalry and disagreement between us? And they include voices of young people who are looking for fulfilment but are unable to find it in contemporary culture which values happiness in terms of money and material possessions.

So beautiful though this ancient liturgy may be, it’s not about harking back to the past but rather about what the Churches, together, can do to help people suffering around the world today. It still won’t be easy to clear away all those obstacles that have built up between Catholics and Orthodox over the past millennium, but it’s one of the most urgent tasks facing Christians today. It’s the reason why the Pope has come here to Turkey for a personal encounter that can help to speed up this urgent reconciliation process.