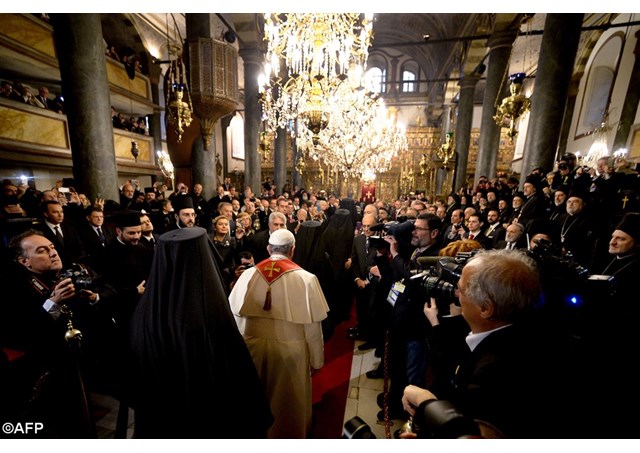 (Vatican Radio)  Pope Francis has attended the Divine Liturgy celebrated by Ecumenical Patriarch Bartholomew I on the Feast of St. Andrew at the Church of St. George at the Ecumenical Patriarchate of Constantinople.  Sunday is the third and last day of Pope Francis’ apostolic visit to Turkey.  Upon conclusion of the Liturgy, the two Church leaders are expected to sign a Joint Declaration.  This will be followed by lunch at the Patriarchate.  In the early afternoon, before leaving Istanbul at 5pm local time, Pope Francis will meet students of the Salesian Oratory.

Pope Francis began the day Sunday with a private mass at the papal nunciature in Istanbul.  Following Mass, he met the Great Rabbi of Turkey, Isak Haleva, head of the 25,000 strong Jewish community in the predominantly Muslim country.  Rabbi Haleva previously had met Pope Benedict XVI in Istanbul, during the former pontiff’s pastoral visit to Turkey on 30 November 2006.