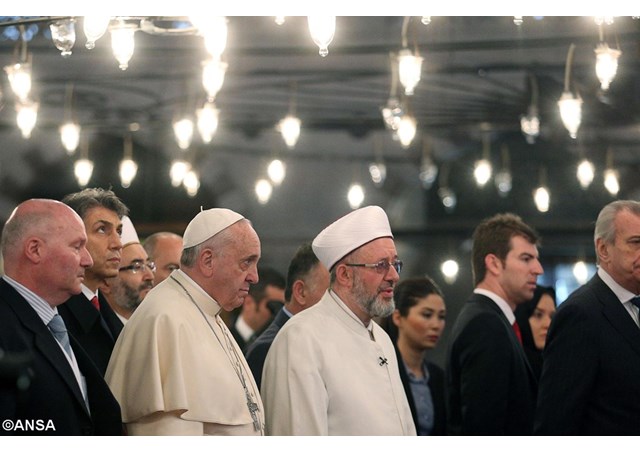 (Vatican Radio) Pope Francis arrived in Istanbul on Saturday, the second day of his apostolic trip to Turkey. A slight change in the morning’s events meant that, instead of starting at the famed Hagia Sofia, he began with a visit to one of Istanbul’s most important mosques, the Sultan Ahmet, also known as the “Blue Mosque.”

He then received a guided visit of the Hagia Sofia, a former basilica, which had been converted into a mosque in the 15th century and is now a museum. Prior to lunch, the Pope joined members of the local Catholic community in the garden of the Pontifical Delegation to Istanbul, where he also met the president of Turkey’s Catholic episcopal conference, Bishop Ruggero Franceschini, OFM Cap.

Vatican Radio journalist Philippa Hitchen is on the ground, covering the Pope’s three-day apostolic journey. She shared this morning’s highlights, including the Pope’s meeting with the Grand Mufti at the mosque and the Pope’s message.

Listen to Philippa Htichen in an interview with Laura Ieraci:

During his visit to the mosque, Fr Federico Lombardi, director of the Holy See Press Office, said the Pope paused for a "moment of silent adoration." The Pope wrote a dedication in the "Gold Book" of the Hagia Sofia. He first wrote in Greek, “Αγία Σοφία του Θεού”, which means Saint Sofia of God. He subsequently wrote in Latin, "Quam dilecta tabernacula tua Domine (Psalmus 83)". The citation from Psalm 83 translates as, "How lovely is your dwelling place, O Lord." Then, he signed his name.