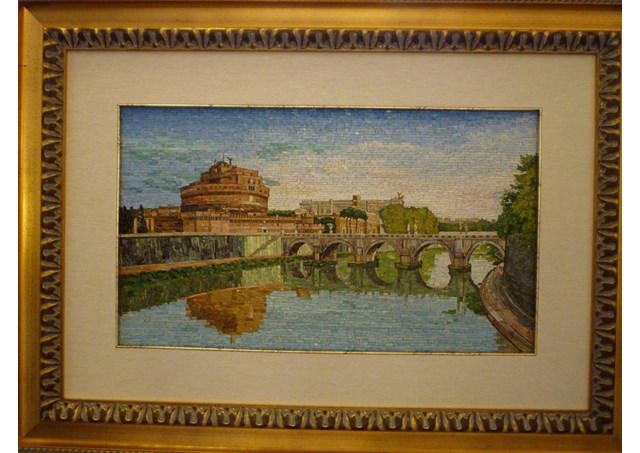 (Vatican Radio) As is customary during every apostolic journey, an exchange of gifts takes place between the Pope and the President – or leader - of the host country.

During Pope’s Francis’ meeting with Turkish President Recep Tayyip Erdogan, straight after the welcome ceremony on Friday morning, the Pope presented the President with a mosaic depicting the “View of Castel  Sant’Angelo”.

The mosaic was especially created for the occasion by the mosaicists of the Vatican Mosaic Studio this year.  Polychrome enamels were used, applied with oily stucco on a metallic base. The stucco is of the same formula as that utilized in past centuries to apply the mosaics in St. Peter’s Basilica.

The technique of “fused glass pulled by hand”, typical of the Vatican Mosaic Studio, was used in the production of the work which is taken from an oil painting by Antonello Riommi, a contemporary Roman painter.

The history of Castel Sant’Angelo goes parallel with that of Rome, changing role and significance as the city morphed with the times.

It came into being as a mausoleum commissioned by the Emperor  Hadrian in a suburban area of ancient Rome and it carried out this original function up until about  403 d.C. when it was included in the Aurelian Wall by order of the Emperor of the West, Honorius.

It then became a castellum: an outpost fortress beyond the Tiber for the city’s defense.  Numerous Roman families vied for its possession until a Pope of the Orsini family – Pope Nicholas III – ordered the construction of the Passetto di Borgo, that connects the Vatican to the Castle, in a physical and ideal continuity.

In 1367 the keys of the building were handed over to Pope Urban V, to promote the re-entry of the Curia to Rome from Avignon exile. From this moment on, Castel Sant’Angelo became inseparably tied to the fates of the pontiffs, who used it as a refuge in moments of danger. Thanks to its solid  and fortified structure and to its reputation for being unassailable, the Castel housed the Vatican Archive and Treasure, but was also converted to a courthouse and prison.

Today it is a major tourist attraction.