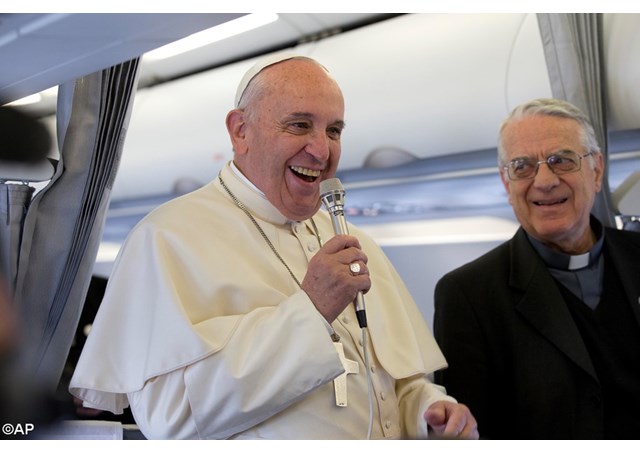 (Vatican Radio) Pope Francis greeted journalists travelling with him on the flight to Strasbourg. Introducing the Holy Father, the Director of the Holy See Press Office, Father Federico Lombardi, SJ, noted that there were fewer journalists than normal aboard the plane, as many of the news services had correspondents awaiting the Pope in Strasbourg. However, he said, “here we have about fifty of the ‘most faithful’ [journalists],” those who desire to see and hear everything the Pope does. This shows “a great affection for, and attention to” the Holy Father.

Greeting the journalists, Pope Francis said he hoped that the early morning flight and the busy schedule would not be too tiring for them. “A short time, and so much to do!” he said. The Holy Father told the journalists that he would have time to visit with them on the return flight to Rome, assuring them, “I am at your disposal, as usual.”

The Holy Father arrived in Strasbourg at approximately 10:30 local time, for a whirlwind visit to the European Parliament and the Council of Europe.