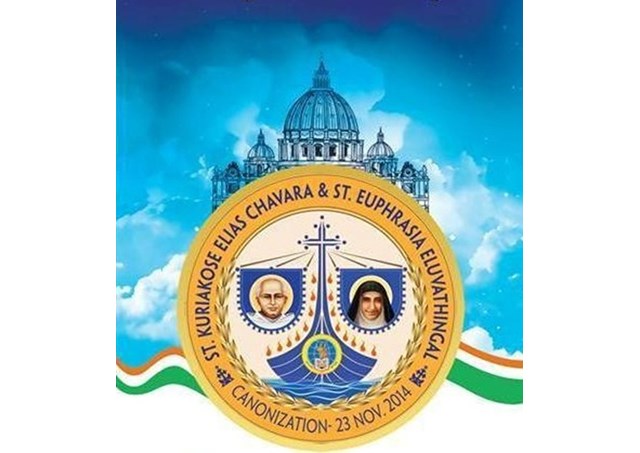 At least 4,000 Indians are expected at the Vatican this weekend to see Pope Francis officially declare an Indian priest and a nun as saints, along with four Italians.   Blessed Chavara Elias Kuriakose (1805-1871) and Blessed Euphraisa of Sacred Heart of Jesus (1877-1952), both from the Syro-Malabar Church based in southern Kerala state, are set be canonized on Sunday, November 23.  The canonizations come six years after the canonization of India's first woman saint, Sister Alphonsa of the Immaculate Conception, said Cardinal George Alencherry, the head of the Syro-Malabar Church.  Both the future saints are credited with spearheading a better spiritual and social awareness that have become the foundations of present-day Catholic life in Kerala, the cardinal told ucanews.com.  "We expect some 4,000 people from India at the Vatican. Also, hundreds of our priests and nuns working in Europe and other parts of Asia should be attending it,” said Father Robin Kannanchira, public relations officer for the congregation Fr. Chavara founded - the Carmelites of Mary Immaculate (CMI).

Social thinkers and historians say Fr. Chavara was a leading social reformer in 19th century Kerala, which was beset with social ills such as the caste system, discrimination and pervasive superstition.  Fr. Chavara was instrumental in establishing modern secular education along with parish churches to provide education to all people irrespective of caste and religion, said KS Radhakrishnan, former vice chancellor of Kerala’s Sanskrit University.  Fr. Chavara established a Sanskrit school in 1846, when Sanskrit was considered the language of affluent classes and learning it was reserved only for upper-caste people.   By opening his Sanskrit school to all, "this visionary … was pioneering a revolution, making low caste people enjoy wealth, power and position", he said.

In 1829, Fr. Chavara established the CMI, the first indigenous religious institute for men in the Kerala Church, becoming its first prior-general.  Almost four decades later, in 1866, he began the first convent of the Congregation of Mother Carmel (CMC), the women’s branch of the CMI, whose member Sr. Euphrasia will also be canonized on Sunday.   CMC superior-general Sister Sancta Kolath described Sr. Euphrasia as a ‘mystic’ known for her intense prayer life, and not for building up anything or social reform. People flocked to her for counsel and her inspiration is helping the congregation in the fields of education, social work and healing across India and Europe, Sister Kolath said.  (Source: UCAN)