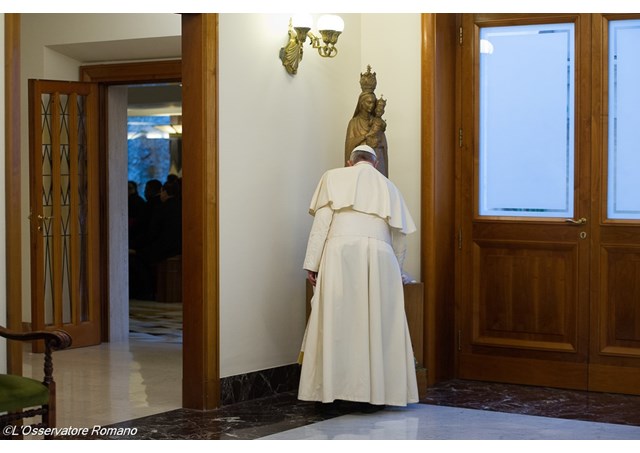 (Vatican Radio) People will forgive a weak priest or pastoral minister, but they will not forgive a greedy one or one who mistreats people, said Pope Francis at Mass Friday morning as he marked the feast of Presentation of the Blessed Virgin Mary with a prayer that she help us keep the Lord's Temple clean.

Basing his homily on the Gospel of the Day in which Jesus drives the merchants from the Temple because they had turned the house of prayer into a den of thieves, Pope Francis said in doing so Jesus was purifying the Temple of God because it had been profaned and with it the People of God.  The Temple had been defiled with the gravest of sins: scandal.

"People are good – continued Pope Francis- people went to the Temple and did not look at these things, they sought God and prayed ... but they had to change their money into coins to make offers". The people of God did not go to the Temple for these people, for those who were selling things, they went because it was the Temple of God" and "there was corruption that scandalized the people".  Pope Francis recalled the biblical story of Anna, a humble woman, mother of Samuel, who goes to the temple to ask for the grace of a child: "she whispered her prayers silently" while the priest and his two sons were corrupt, they exploited the pilgrims, they scandalized the people. “I think of how our attitude can scandalize people - said Pope Francis – with unpriestly habits in the Temple: the scandal of doing business, the scandal of worldliness ... How often when we enter a church do we see  – even today – do we see a price list hanging there "for baptism, blessings, Mass intentions". And people are scandalized".

"Once, as a newly ordained priest, I was with a group of college students and one couple wanted to get married. They went to a parish, but they wanted a wedding ceremony with the Mass. And, the parish secretary there said: 'No, no, you cannot' - 'Why can’t we have a Mass? If the Council always recommends people to have a ceremony with the Mass ... '-' No, you cannot, because it can’t last more than 20 minutes'-' But why? '-'Because there are other slots [in the timetable for ceremonies]'-'But, we want the Mass! '-' So you will have to pay for two slots! '. So in order to have a wedding ceremony with the Mass had to pay two slots. This is the sin of scandal".

The Pope added: "We know what Jesus says to those who are the cause of scandal: 'Better to be thrown into the sea'".

"When those who are in the Temple – be they priests, lay people, secretaries, but who manage the Temple, who ministry of the Temple - become businessmen, people are scandalized. And we are responsible for this. The laity too! Everyone. Because if I see this in my parish, I have to have the courage to say these things to the parish priest. And the people are scandalized. It is interesting: the people of God can forgive their priests, when they are weak; when they slip on a sin ... the people know how to forgive them. But there are two things that the people of God cannot forgive: a priest attached to money and a priest who mistreats people. This they cannot forgive! It is scandalous when the Temple, the House of God, becomes a place of business, as in the case of that wedding: the church was being rented out”.

Jesus "is not angry" - said the Pope - "it is the Wrath of God, zeal for the House of God" because you cannot serve two masters, "either you worship the living God, or your worship money".

"Why does Jesus have an issue with money? Because redemption is free; it is God’s free gift, He comes to brings us the all-encompassing gratuity of God’s love. So when the Church or churches start doing business, then it is said that ….salvation is not so free…This is why Jesus takes the whip to hand to carry out this act of the purification of the Temple. Today the Liturgy celebrates the Presentation of the Blessed Virgin in the Temple: as a young girl ... A simple woman, like Anna,   and in that moment the Blessed Virgin Mary enters. May she teach all of us, pastors and those who have pastoral responsibility, to keep the Temple clean, to receive with love those who come, as if each one were the Blessed Virgin”.