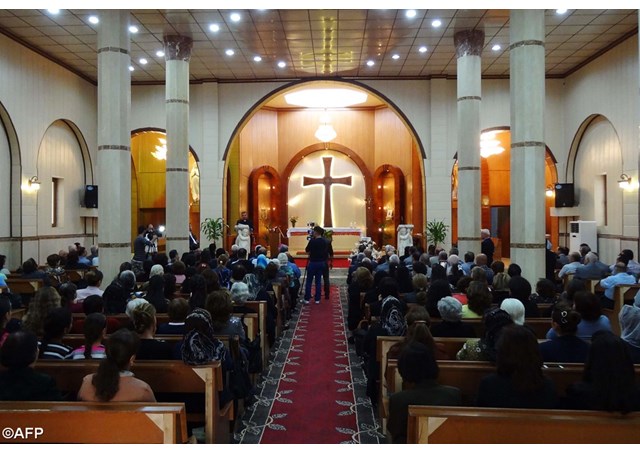 (Vatican Radio) The Vatican’s representative to the United Nations in New York has called on the UN  “to act to prevent possible new massacres of defenseless religious and ethnic minorities” in Iraq by the so-called Islamic State.

Archbishop Bernardito Auza was speaking last week at a Pax Romana sponsored symposium held at the United Nations on the Protection of Religious Minorities Worldwide.

“With lessons learned from a failure to stop recent horrors of genocide due to ethnic and religious intolerance, and presently confronted with clear, massive violations of fundamental human rights and of international humanitarian law, the time is for courageous decisions,” said Archbishop Auza.

The full intervention by Archbishop Auza is below

Symposium on the Protection of Religious Minorities Worldwide

Your Excellency Nassir Abdulaziz Al-Nasser, UN High Representative for the Alliance of Civilizations,

At the very outset, I wish to thank the UN Alliance of Civilizations and Pax Romana for organizing this Symposium on the protection of religious minorities worldwide.

This is a burning issue, thus highly relevant. In many parts of the world, religious minorities are continuously subjected to violations of their fundamental human rights, simply because of their religion and religious belief. It is for this reason that just yesterday, Pope Francis reiterated his appeal to those who have political responsibility both on a local and on an international level, as well as to all persons of goodwill, to engage in a vast mobilization of consciences on the plight of persecuted Christians and of all religious minorities, who are denied their fundamental human rights for religious reasons.

This Symposium responds to this appeal, as it intends to sensitize us to the extremely difficult situations that religious minorities are facing today in many parts of the world, in spite of the laudable effort of institutions and individuals. Looming large in our preoccupations is the outright persecution of the ethnic and religious minorities, including the Christian communities, in northern Iraq by the so-called Islamic State of Iraq and the Levant (ISIL). Their treatment of the minorities, as well as so many of those in the majority religion who do not agree with their own interpretation of the religious texts, violates the most fundamental human rights. Their intolerance and brutal deeds in the name of religion speak eloquently of the tremendous harm that distortion of religion can do to people and to religion itself.

The Holy See insists that these ruthless violations must not only be seen as violence against ethnic and religious minorities, but first and foremost must be condemned as blatant violations of fundamental human rights, and must be dealt with accordingly.

The Holy See calls on the competent organs of the United Nations to act to prevent possible new massacre of defenseless religious and ethnic minorities. Along this line, the United Nations should re-enforce the international juridical framework of a multilateral application of the responsibility to protect people from genocide, war crimes, ethnic cleansing, crimes against humanity and all forms of unjust aggression. With lessons learned from a failure to stop recent horrors of genocide due to ethnic and religious intolerance, and presently confronted with clear, massive violations of fundamental human rights and of international humanitarian law, the time is for courageous decisions.

Finally, this Symposium should serve to remind religious and civic leaders of their grave responsibility to foster respect for religious minorities and avoid fomenting discrimination and violence against them. As a cleric myself, I reiterate the call of Pope Francis to all the religious leaders everywhere in the world to play a leading role in promoting interreligious and intercultural dialogue, in promptly denouncing every misuse of religion to justify violent extremism, and in educating all to reciprocal understanding and mutual respect. Moreover, all of us must assume this responsibility to practice openness, dialogue and sincere acceptance of the ethnic or religious minorities in our midst. This is especially true and urgently needed in those countries and regions where religious minorities, even at this very moment, are discriminated against and persecuted.

A world that truly respects religious freedom must move beyond mere toleration to a lived conviction that, as the Universal Declaration of Human Rights and international human rights instruments explicitly affirm, “everyone has the right to freedom of thought, conscience and religion”, and that “this right includes freedom to change his or her religion or belief, and freedom, either alone or in community with others and in public or private, to manifest his or her religion or belief in teaching, practice, worship and observance.” And the freedom not to believe, as well.

I am sure that our Panelists will provide us ample information and reflection on this problem that plagues the human family today.