Pope to visit FAO on occasion of nutrition conference 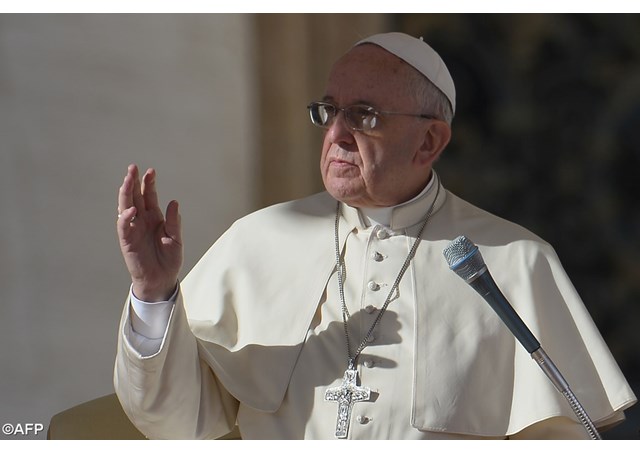 (Vatican Radio) Pope Francis will on Thursday pay a visit to the Headquarters of the UN Food and Agriculture Organisation here in Rome on the occasion of the Second International Conference on Nutrition.

The three day gathering which began on Wednesday brings together senior national policymakers on agriculture and health along with leaders of United Nations agencies and other intergovernmental organizations and civil society.

Listen to Lydia O'Kane's interview with Boitshepo Giyose a senior food and nutrition security adviser for the New Partnership for Africa’s Development Secretariat.

Although the conference will have a global perspective, it will focus particularly on nutrition challenges in developing countries.

Attending the event is Boitshepo Giyose a senior food and nutrition security adviser for the New Partnership for Africa’s Development Secretariat, (NEPAD) South Africa. She to Vatican Radio of her hopes for the conference. “It is not just another conference really it is a call to action for all actors, for all governments , for the global economy, for the global players to pull together, work in tandem, work in harmony to ensure a common goal of reducing hunger and malnutrition, assuring that the post 2015 Agenda are acted on.”

In the past Pope Francis has spoken out against a culture of waste when their are people are starving in the world, saying, “This culture of waste has made us insensitive even to the waste and disposal of food, which is even more despicable when all over the world, unfortunately, many individuals and families are suffering from hunger and malnutrition.”

Stressing the importance of the Pope’s voice on the issue of food and nutrition justice Ms Giyose added that, “Pope Francis… in his stature, he is a champion in his own right for food justice, for nutrition justice. We cannot continue to live in a world whereby there’s so much food waste, there is so much wastage…”

Other participants at the conference the Prime Minister of Bangladesh and the King of Lesotho.

The meeting runs until the 21st of November.