Pope Francis: Christians remember where they came from 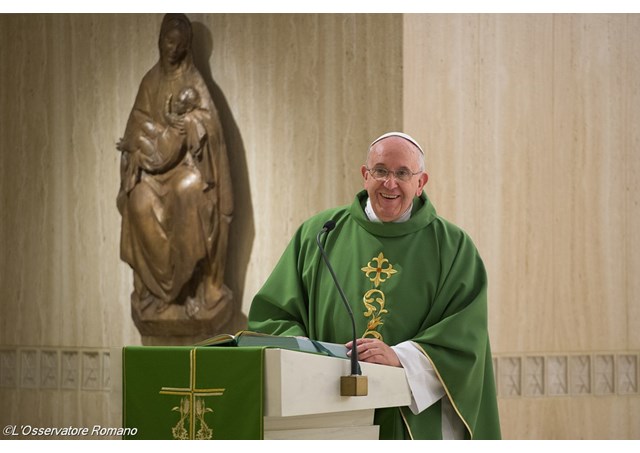 (Vatican Radio) The temptation that Christians face to be with Jesus without being with the poor and marginalized: this was the focus of Pope Francis’ remarks to the faithful following the readings of the day at Mass on Monday morning in the chapel of the Santa Marta residence in the Vatican.

The Holy Father said that the temptation to ignore Christ when he appears to us in the poor and afflicted is one that faces the Church in every age. Pope Francis offered his reflections following the Gospel reading of the day, which recounted the episode of the Lord’s miraculous healing of the blind man on the road to Jericho – a type of figure prominent in the Gospel according to St Luke (18:35-43), from which the reading was taken. The blind man was a no-account in the eyes of the world, a man who, “desired only salvation,” who so greatly, “desired to be cured,” of his affliction that he shouted and shouted, until the wall of indifference collapsed and he was able to knock, “on the door of the Lord’s heart.” The circle of disciples wanted only to quiet him, to keep him from disturbing the Lord:

“This [person on the margins] could not reach the Lord, because this clique – with a the best of intentions, mind you – closed the door.  This happens frequently, among us believers: when we have found the Lord, without our noticing it, we create this sort of ecclesiastical micro-climate . Not only the priests, the bishops, but the faithful, as well: ‘We’re the ones who are with the Lord,’ [we say to ourselves], though for all our looking on Him, we fail to see His needs. We do not look to the Lord who is hungry, who is thirsty, who is in prison, who is in hospital – to the Lord, who is in the marginalized – and being [so closed off, so sealed up], does great harm.”

Pope Francis went on to describe a second type of Christian – of whom there are a few – the kind of follower of Christ, who feels especially chosen. Such as these say and think things like, “Now we are the elect, we are with the Lord,”  said Pope Francis, adding that they therefore want to keep “this little world” to and for themselves – to keep it away from anyone – even little children – who might “disturb the Lord,” and saying that such as these, “have abandoned their first love.”:

“When in the Church, the faithful, ministers, become a group like this ... not ‘ecclesial’, but ‘ecclesiastical’, [enjoyng] the privilege of closeness to the Lord, they are tempted to forget their first love – a love so beautiful – one we all had when the Lord has called us, saved us, told us: ‘But I love you so much.’ This is a temptation all disciples have: to forget our first love, that is, to forget the [rough neighborhoods], where [we all came from], even though [we are now] ashamed of it.”

Then the Holy Father described the third group on the scene: the “simple folk” – the ones who praise God for the healing of the blind man. “How many times,” he asked, “do we find simple people, how many old ladies who can barely walk,” but who make the trip, “to pray at a one of Our Lady’s shrines.” He went on to say that such as these, “do not ask for privileges, but only for grace.” Such as these, he continued, are “the faithful people” who know how to “waste time with the Lord,” and, “to follow the Lord, without asking special privileges,” and who, above all else, remember the “Church on the margins,” comprised of children, of the sick, of the imprisoned:

“Let us ask the Lord for the grace that all of us who have received the grace of being called, never, never, never move away from this Church. Let us never enter into this micro-climate of the privileged ecclesiastical disciples, who turn away from the Church of God, which is suffering, asking for salvation, which calls for faith, which begs to hear God's Word. Let us ask the grace to be faithful to God, without asking the Lord for privileges, which separate us from God's people.”