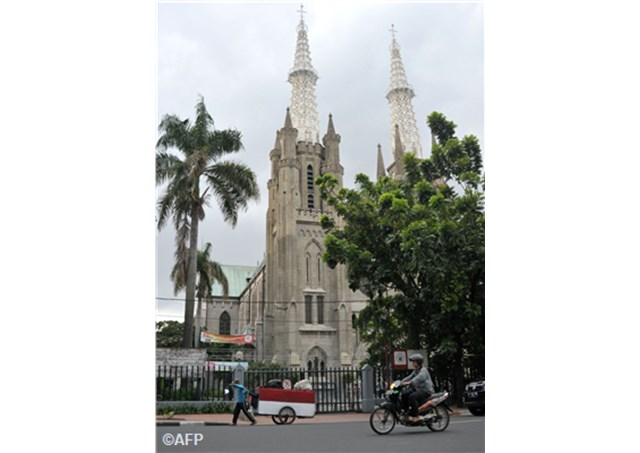 In what may be viewed as a climate of increasing cases of violence and abuse against religious minorities, a Catholic community in the West Jawa province of Indonesia was attacked last Sunday during the celebration of the Holy Mass by extremist groups who also wanted to prevent the faithful from gathering for worship there. After having attacked the Protestant community on earlier occasions, extremist groups of the Islamic Defenders Front (FPI) and the Formasi (Forum of Indonesian Islamic community) have attacked Catholics over the weekend.

The warning was launched in a series of text messages that started circulating in recent days and were confirmed later by Fr. Saptono, priest of the parish of St. Odilia in Cinunuk, in the regency of Bandung (West Java province). The complex of St. Charles Borromeo was targeted in the November 9 raid when it was surrounded by dozens of extremists - shouting insulting slogans and mafia-style messages - who blocked the celebration of Sunday Mass.

The FPI and the Formasi members threatened to burn the property if, in the future, Masses or other Christian services are celebrated. To avoid the worst damage, the priest - while engaged in a discussion with some representatives of the extremist groups - asked the faithful to remove the sacred objects and symbols of faith.

What convinced the extremists, curbing their destructive folly, was a promise made by the priest that there would be no more celebrations in the structure. Addressing the faithful, Fr. Saptono saw it as a ‘shocking’ event for a private community and an abuse of their right to prayer and to the free practice of worship "after 16 years of peaceful existence".

The presence of Catholics in the area dates back to 1995. "After the four Protestant churches blocked since 11 October - adds the priest - it is now the turn of the Catholic community." Limitations on the practice of worship concern not only the communities of Cinunuk, but also locations scattered in West Java, one of the areas most at risk from intolerance or sectarian violence. These attacks have not only affected Christians but also other minorities, including Ahmadis and Shias.

In a spate of similar incidents of the recent past, a group of Islamic extremists in the area of Besi had brutally and violently attacked faithful of the parish of the Holy Family of Banteng on May 29, this year in the area north of Yogyakarta (island of Java). Church sources in Semarang had confirmed the attack took place when Catholics held their weekly meeting to pray the Rosary and practice their Sunday hymns. A group of Islamic fundamentalists had raided the private house owned by a local Catholic leader, throwing stones and rocks. The assailants had brutally beaten him and then fled in haste.

Another Catholic community, the Parish of the Sacred Heart in Pugeran, in the South of Yogyakarta was targeted early June 29, morning by three different groups of unknown assailants on motorcycles. The attack took place during the first morning Mass: the assailants, dressed in black with their faces covered by masks, broke through the parish gates shouting "Allah is great".

A publication early this year pointed out that the churches suffered an average of 56 incidents of religious rights violations annually in Indonesia over the past seven years. The Jakarta Christian Communications Forum records show churches suffered 392 incidents of religious rights violations, mainly closures and attacks, from 2007 to 2013, and sources had said neither of the candidates vying for the presidency of Indonesia on July 9 was expected to arrest the deterioration of religious freedom begun during that period. The onus is now on the new Government of President Joko "Jokowi" Widodo and neo Jakarta Governor Basuki Tjahaja Purnomo, better known as Ahok, number two Widodo, who will have their hands full in trying to stem this extremist drift that was endorsed for years by the previous government.

Indonesia, the world's most populous Muslim nation, where Catholics are 3 per cent of the population, is becoming as one of the main centres of Islamic activism in the Asia-Pacific region. As AsiaNews recently reported, fundamentalist movements and local Muslim leaders have found inspiration in the exploits of Sunni fighters in Syria and Iraq and plan to support the struggle for the establishment of the Islamic Caliphate, even in Asia.