“We used to think that salt is the cheapest commodity...life is cheaper!" 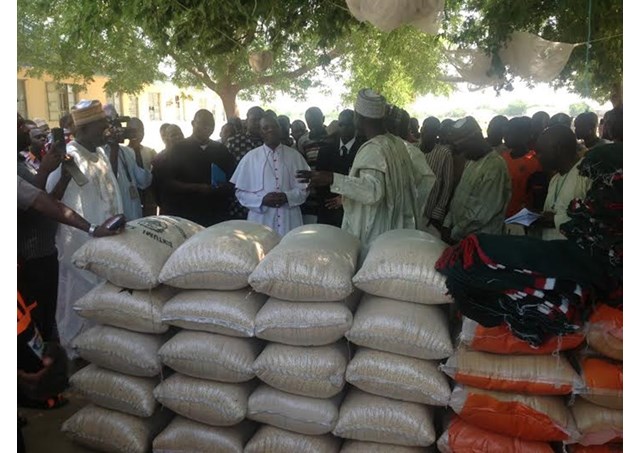 Bishop Oliver Dashe Doeme of Maiduguri Diocese has described the situation of Nigerians in the Boko Haram affected states of the Northeastern region as “a pathetic state of human degradation, with the government watching helplessly-on, in spite of their claiming to be on top of the situation.”

Bishop Doeme made this assertion during a recent interview with Aid to the Church in Need, an International Catholic agency which provides assistance to the suffering and persecuted church in more than 140 countries of the world, under the guidance of the Holy See.

The Bishop disclosed that the unchallenged take-over of many towns and villages in the northeast part of Nigeria has resulted in many thousands of Internally Displaced People (IDP’s), with some of them living in caves and in the forest. Some have sought refuge in houses of well-wishers and church buildings in areas that are still safe from attacks by the Boko Haram terrorists. Other people have fled to neighbouring Cameroun for safety. Bishop Doeme regretted that most of the people are facing difficult living conditions because of lack of food, shelter and medication. He noted that “people are dying every day and in most cases with no one to give them a decent burial – they are left to rot; their homes and properties looted,” adding that “people have become slaves and prisoners in their homeland.”

Bishop Doeme is saddened by the fact that life has become so cheap in the northeastern area that it can be wasted at any moment as the government was no longer capable of safeguarding the lives of its citizens. To stress his point, he made a startling analogy when he said, “We used to think that salt is the cheapest commodity on the market – life is cheaper now, especially in the northeastern part of Nigeria.”

Bishop Doeme strongly believes that the Boko Haram insurgency has religious undertones even if both Moslems and Christians have been affected by the group’s unrelenting campaign of terror. “We might shy away from it and we may be silent, unable to speak up – at least for now – against this push to Islamise the northeast and eventually all of Nigeria. But what we are witnessing in Adamawa state is a clear confirmation of the pursuit of this agenda.” The Bishop added:

According to the Bishop, government funds earmarked for victims of terrorism seldom reach the actual people on the ground. It is for this reason that the Catholic Church has been making efforts to offer as much assistance to the victims. He disclosed that his diocese has been involved in providing essential relief services for some of the victims of displaced by the Boko Haram insurgency. He says, the Diocese of Maiduguri has given some relief materials to over 1, 500 Internally Displaced Persons (IDPs) and it has joined hands with Yola Diocese to assist those who have taken refuge there.” He continues, “In the spirit of ecumenism, we have even assisted refugees in Maiduguri whether they are Christians or Moslems.”

Bishop Doeme however noted that the capacity of the diocese to provide the needed charitable work has been stretched to the utmost and the diocese was unable to cope. He appealed for  more external assistance to help alleviate the difficult situation of IDPs, “especially of children who are not in school, are prone to diseases and face an uncertain future”.