Pope prays for persecuted Christians and calls for dialogue 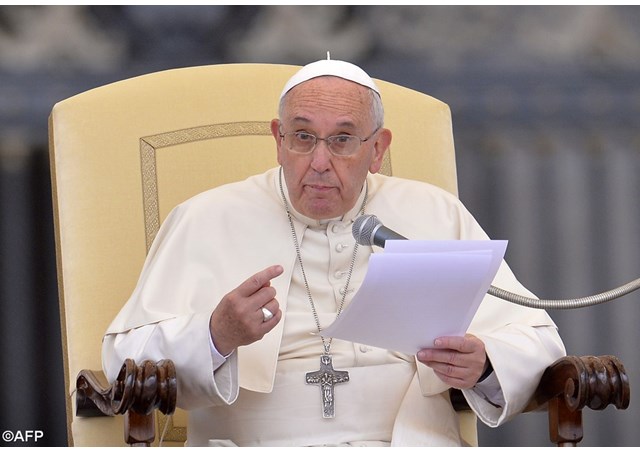 (Vatican Radio) Pope Francis has appealed to international and local leaders to take action to protect and support persecuted Christians in various parts of the world; he expressed his closeness to the people of Mexico for the disappearance of a group of students who have allegedly been killed by drug traffickers; and he recalled the 30th anniversary of the peace treaty between Argentina and Chile invoking dialogue and peacemaking for all peoples locked in conflict.

In a series of appeals issued during the weekly General Audience, the Pope spoke off- the-cuff to various language groups present in St. Peter’s Square.

In Spanish he turned to pilgrims from Mexico expressing his sorrow for what appears to be the (legal?) disappearance “even although we know they have been murdered” – of 43 students. This renders visible – the Pope said – “the dramatic reality of crime that exists behind the selling and trafficking of drugs”.

And turning to a group of Chilean soldiers, Pope Francis said that in these days we mark the 30th anniversary of the signing of the peace treaty between Argentina and Chile. Borders – he said – are clear: “let us not continue to argue about borders. Let us argue about other things, but not about this!” And he noted that the signing of the treaty came about thanks to dialogue. “Only when the will for dialogue exists, things are resolved” he said. And he expressed gratitude to “Saint John Paul II and to Cardinal Samorè who did so much to obtain peace for us”.

Let us hope that all peoples locked in conflict of any kind, including cultural borders – Pope Francis said – “make a commitment to resolve their issues at the table of dialogue and not through the cruelty of war”.

And finally speaking in Italian, Pope Francis said he is following with great trepidation the dramatic situation of Christians who “in various parts of the world are persecuted and killed for their religious faith”. He said he feels the need to express his “deep spiritual closeness to Christian communities who are harshly persecuted with an absurd violence that does not give signs of abating”. Encouraging pastors and faithful to be firm and united in hope, “once again” – the Pope said – “I turn to those who have political responsibility both on a local and on an international level, as well as to all persons of goodwill, with a heartfelt appeal to engage in a vast mobilization of consciences in favour of persecuted Christians. They have the right to once again find security and serenity in their own countries, freely professing our faith” he said.