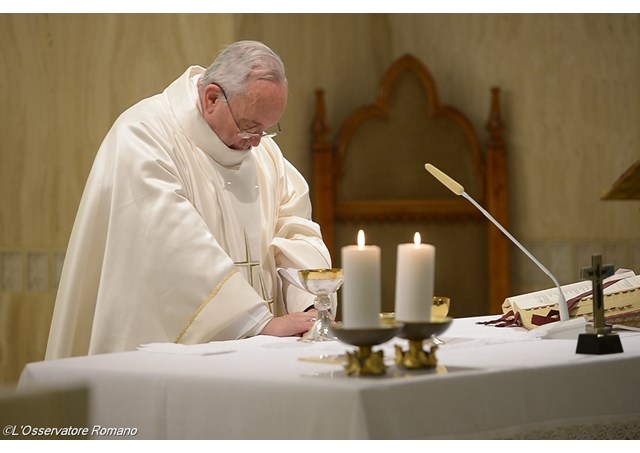 (Vatican Radio) We must resist temptations that distance us from our service to others. Instead, like Jesus, we must serve without asking for anything in return and avoid transforming our service "into a power structure". This was the focus of Pope Francis’s reflections at Mass Tuesday morning in Casa Santa Marta.

The Pope based his homily on the Gospel of the Day from St Luke which recounts Jess parable of the "unprofitable servant". Pope Francis said it teaches us what service means for a Christian.   Jesus speaks of a servant who, after working all day, comes home and instead of resting still has to serve his master:

"Some of us would advise this servant to go to his trade union for some advice, on how to deal with a boss like that. But Jesus said, 'No, service is total', because His path was this attitude of service; He is a servant. He presents himself as a servant, the one who came to serve and not to be served: He says so clearly. And so, the Lord shows the Apostles the path of those who have received the faith, that faith which works miracles. Yes, this faith will do wonders on the path of service".

The Pope added, a Christian who receives this gift of faith in Baptism, but who does not carry forward this gift on the path of service, becomes a Christian without strength, without fertility". In the end, he warned, he becomes "a Christian out for himself, to serve himself." His is a "sad life", "the many great things of the Lord" are "wasted".

Pope Francis reaffirmed that the Lord tells us that "service is total", we cannot serve two masters” either we serve God or we serve riches. We may distance ourselves from this "attitude of service, first of all out of laziness, which cools our hearts “making them lukewarm, laziness makes us comfortable".

"Laziness distances us from work and leads us to this ease, this selfishness. Many Christians are like this ... they are good, they go to Mass, but only serve to a certain point ... But when I say service, I mean everything: service to God in worship, in prayer, in praise; service to others, when I have to do it; service to the very end, because Jesus is strong in this: So should it be with you. When you have done all you have been commanded, say, ‘We are unprofitable servants. Gratuitous service – service that asks for nothing in return".

The Pope said we can understand this dynamic from observing the discussion between James and John about who was the greatest. Their mother "goes to ask the Lord for one of her sons to be Prime Minister and the other minister of the economy, with all the power in hand". This happens even today when "Christians become masters: masters of the faith, masters of the Kingdom, masters of Salvation". This happens; it is a temptation for all Christians. Instead, the Lord speaks to us about service: "Service in humility", "service in hope, and this is the joy of Christian service".

"In life we have to struggle so much against the temptations that try to distance us from this attitude of service. Laziness leads to ease: half-hearted service; taking control of the situation, and to becoming master instead of servant, which leads to arrogance, pride, to treating people badly, to feeling important 'because I am a Christian, I have salvation', and so many things like this. The Lord gives us these two great graces: humility in service, in order to be able to say, 'We are unprofitable servants - but servants - until the very end'; and hope while waiting for the manifestation, when the Lord will come to us".