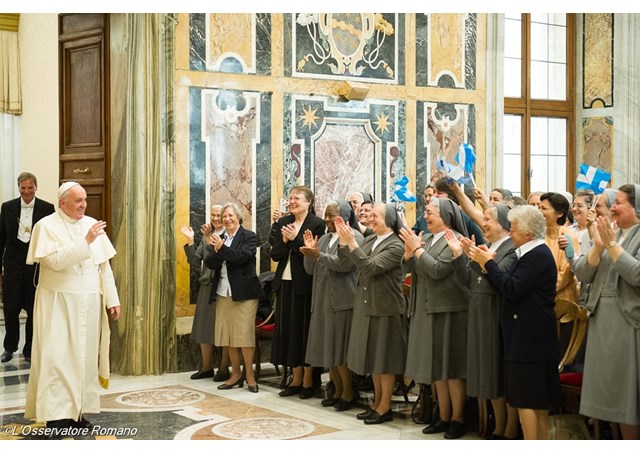 (Vatican Radio) Pope Francis has encouraged the Daughters of Mary Help of Christians to be prophetic witnesses and to widen their gazes to recognize the most authentic and urgent needs of a generation that is changing.

The sisters, whose mission is among the young and the poor, were founded by Saint John Bosco and Saint Maria Domenica Mazzarello and are more commonly known as the Salesian Sisters.

On Saturday, Pope Francis met with those sisters who are in Rome for the institute’s General Chapter. In addition to electing their new General Council, the Chapter also served to reflect on the institute’s mission and to draw new lines for pastoral action.

The Pope encouraged the sisters to move ahead with their new orientations, which include transforming their houses into environments for evangelization, implementing paths for change and pastoral conversion, and forming young people to become evangelizers of other youth. He also encouraged them to sustain their lives with prayer, adoration and the Word of God.

With regard to their mission among the young, the Pope urged the sisters to “be everywhere a prophetic witness and educative presence through an unconditional welcome of the young…and individuating paths to render (their) apostolic interventions effective in a context…permeated by the virtual world and new technologies.”

Speaking of the sisters’ call to witness to community, he also warned them of what he termed the “terrorism” affecting religious life—gossip.

“Never should you permit envy and jealousy among you,” he said, adding: “Gossip is a bomb” that destroys community.

He encouraged the sisters toward continuing formation and education in order to help in their  mission.

Finally, he exhorted the sisters to “be missionaries of joy, witness to the values that are proper to (their) Salesian identity, particularly the value of encounter,” describing the latter as “a spring” from which they “can draw that love that revitalizes that passion for God and for the young”.

The Pope concluded, urging the sisters to turn to their founders for inspiration when faced with the inevitable difficulties of the mission.