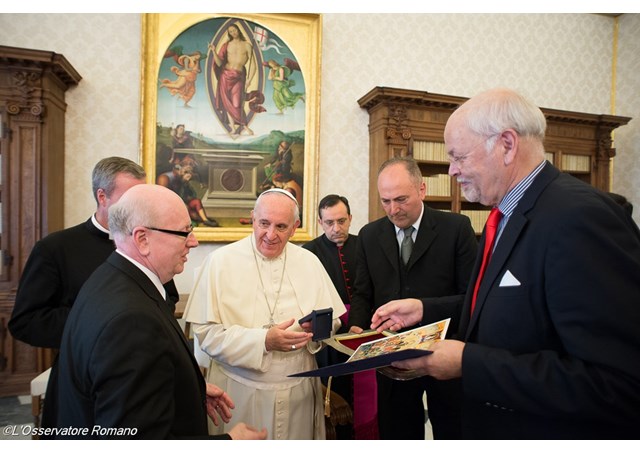 (Vatican Radio) Meeting this week in the Vatican with a delegation from the World Evangelical Alliance (WEA) and its partner “First Step Forum”, Pope Francis has been awarded the annual Shahbaz Bhatti Freedom Award for his tireless commitment to build a more peaceful and reconciled world.

Vatican Radio’s Linda Bordoni spoke to WEA President, Dr Geoff Tunnicliffe, who explained the main reason for the meeting was to talk about areas of potential collaboration, to address global issues of common concerns to both the evangelical community and the Catholic Church.

Tunnicliffe begins by explaining exactly what he means when speaking of a “New Era in Evangelical and Roman Catholic Relations” – which by the way, happens to be the very title of the speech with which he addressed  Pope Francis…

“We are an association of 600 million Christians, but made up of 129 national organizations and regions, and really that was a reflection of current reality because what we are seeing around the world is that in more and more countries, Catholic communities, Catholic bishops’ conferences are working much more closely with the Evangelical community on issues of deep concern and many of the social issues that we face” he says.

And so – Dr. Tunnicliffe points out - regarding the statement of a new era he says “we have already entered this new era because of what of what’s happening in local communities, in countries, so the reflection is on a global level: we are just stating the current reality”.

Dr Tunnicliffe says Pope Francis is contributing to this new momentum but he says it really goes back further and points out that he had the opportunity to speak at the Synod on Evangelization under Pope Benedict, “but I think it has been growing because issues in our societies are recognizing there are some sharp differences in our cultures and the voice of Christian values that need to be heard are represented in the Catholic Church but also in the Evangelicals”.

He says it has been growing and “certainly in the past ten years it has been a rising tide of engagement, not in every country but certainly a reflection of current reality”.

Dr Tunnicliffe speaks of the urgent need to work together on some very specific areas in areas of common concern: “Issues that impact humanity that we must come together around”.

And he points to the most pressing at the moment as being the situation in the Middle East and what could become the eradication of Christianity there.

He speaks of the “Cradle of Christianity” campaign that aims to help Christians fleeing persecution in those regions, of the need to respond to the scourge of human trafficking, of the commitment needed to halt the risk of the proliferation of nuclear arms.

“This is one of those moments in history in which we must all come together on behalf of those who are suffering” he says.