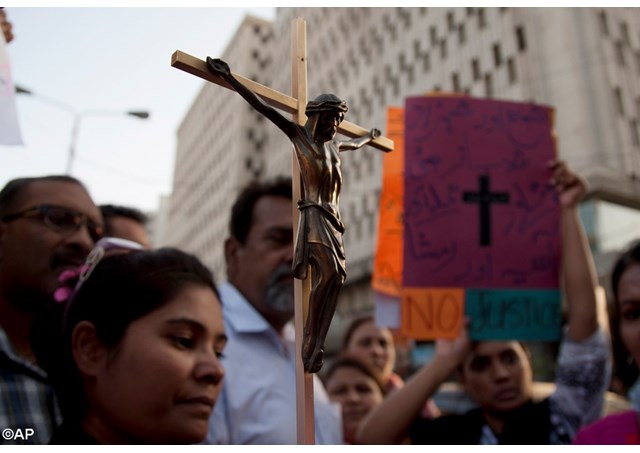 (Vatican Radio) Cardinal Jean-Louis Tauran, president of the Pontifical Council for Interreligious Dialogue has denounced the assassination of a young couple in Pakistan, who had been accused of blasphemy.

In an interview with Vatican Radio, the cardinal added that he was “shocked” by the “barbarous acts”.

According to the couple’s Christian lawyer, the young Shahzad and Shama Masih were beaten by an angry Mulsim mob on Tuesday and then burned alive. Police instead report the young couple was beaten to death and then their bodies burned.

“Obviously, one remains speechless before such barbarous acts,” said the cardinal. “And what is worse is that religion is invoked in a specific way. A religion cannot justify such acts, such crimes. There is this lay on blasphemy, the ‘blasphemy law’, which poses a problem.”

The cardinal noted that there have been about 60 executions under the blasphemy law since it was adopted. He called for some international intervention in the matter, saying that a minimum of humanity and solidarity is required and that dialogue is necessary.

Since direct intervention in Pakistan’s domestic affairs is not appropriate, said the cardinal, legislators must be helped to understand that laws must respect the dignity of the person.

Cardinal Tauran said the Church must denounce such violent acts publicly, with consistency and force. He said he hopes Muslim leaders will do the same. He said Muslims are victimized by these acts of violence as well, as they give a very negative image of Islam.

“Therefore, it is in their interest to denounce such acts in a vigorous manner,” he said.

The cardinal said solidarity is the way to continue giving hope to Christians facing daily threats and violence. He also underlined some encouraging and well-received initiatives by the Church in the Middle East.

“We need to bet on fraternity,” he said, “which is the theme of the World Day of Peace.”