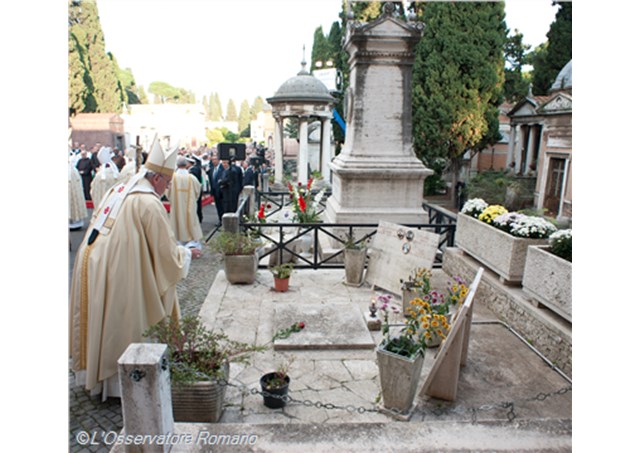 (Vatican Radio) On the evening of  All Saints and on the eve of All Souls, as he did last year, Pope Francis presided over Holy Mass at Rome's Verano cemetery. It was an occasion for the exposition of  the relics of Saints John XXIII and John Paul by a statue of Our Lady that stands in the cemetery.

Earlier on Saturday the pope himself commented on the meaning of this visit to Rome's Verano cemetery: "This afternoon I will go to the Verano cemetery and will celebrate Mass for the souls of the dead. In visiting Rome’s main cemetery, I am united in spirit with those who in these days visit the graves of their dead in cemeteries around the world."

The monumental cemetery of the Verano  takes its name from a family of importance that once lived here at the time of the Roman Republic: the 'Verani'. The location  has been a burial site since Roman times.The present cemetery is striking in its grandeur and owes its lay-out to  well known  Italian architect Giuseppe Valadier.

The cemetery was consecrated in 1835 and work continued there during  the pontificates of  Gregory XVI and Pius IX under the supervision of Virginio Vespignani who later designed a large four sided portico at the entrance.

However it was  partially bombed by Allied forces in 1943 and the ensuing restoration work undertaken led to what one can see there today on entering the cemetery: three great entrances and four imposing marble statues depicting meditation, hope, charity and silence.

Pope Francis made reference to the bombing of the cemetery and to the Rome neighbourhood of San Lorenzo where it is located during his homily when he denounced the devastation of creation, of life and of cultures taking place in the world today and asked  the Lord to help  stop this mad rush towards destruction. He explained how he had seen photographs of this bombing just before celebrating mass and mentioned how he thought how grave and painful this was, placing  this bombing in the current world context.

Interestingly the cemetery has a monument to the fallen of the First World War.