Pope at Mass: Love and justice are more important than attachment to the laws 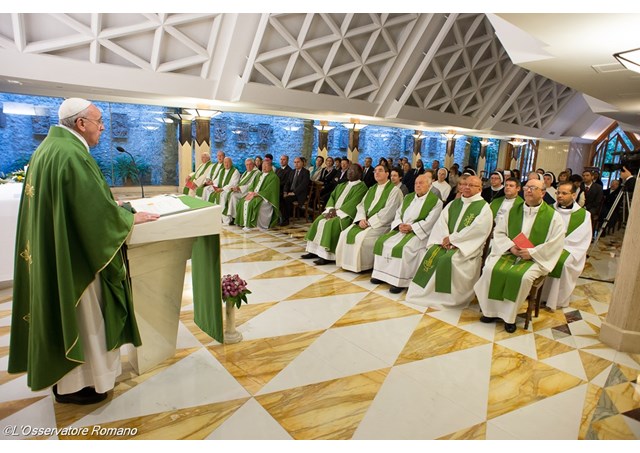 (Vatican Radio)  Pope Francis lamented the case of Christians who are so attached to the laws that they neglect the concepts of love and justice. His words came on Friday during his homily at the morning Mass celebrated in the Santa Marta residence.

Taking his cue from the day’s gospel reading where Jesus asked the Pharisees whether it was lawful to heal a sick person on the Sabbath, the Pope reflected on how love and justice are the path to Christ rather than an excessive attachment to the laws.  He reminded how Jesus described the Pharisees as hypocrites for criticizing him behind his back after he healed a sick man on the Sabbath.

“This way of living attached to the laws, distanced them from love and from justice.  They followed the laws and they neglected justice.  They followed the laws and they neglected love.  They were the models.  And for these people Jesus had only one word (to describe them): hypocrites. On one hand, you travel across the world looking for proselytes: you’re looking for them.  And then?   You close the door.  Closed-minded men, men who are so attached to the laws, to the letter of the law that they were always closing the doorway to hope, love and salvation… Men who only knew how to close (doors).”

“This is the path that Jesus teaches us, totally opposite to that of the doctors of law. And it’s this path from love and justice that leads to God.  Instead, the other path, of being attached only to the laws, to the letter of the laws, leads to closure, leads to egoism.  The path that leads from love to knowledge and discernment, to total fulfilment, leads to holiness, salvation and the encounter with Jesus.   Instead, the other path leads to egoism, the arrogance of considering oneself to be in the right, to that so-called holiness of appearances, right?   Jesus said to these people: You like to be seen by the people as men of prayer and of fasting…:’ To be seen, right?  And it’s for this reason that Jesus tells the people: “do what they tell you but do not do what they do.’”

The Pope said these are the two different paths and Jesus shows us the right one.

“Jesus draws close to us: his closeness is the real proof that we are proceeding along the true path.  That’s because it’s the path which God has chosen to save us: through his closeness.  He draws close to us and was made man.  His flesh, the flesh of God is the sign; God’s flesh is the sign of true justice.  God was made man like one of us and we must make ourselves like the others, like the needy, like those who need our help.”

Pope Francis said Jesus’ flesh is the bridge that brings us closer to God and not the letter of the law.   I hope, he concluded, that these examples of Jesus’s love and closeness can help us from sliding into hypocrisy because a hypocritical Christian is a really bad thing.