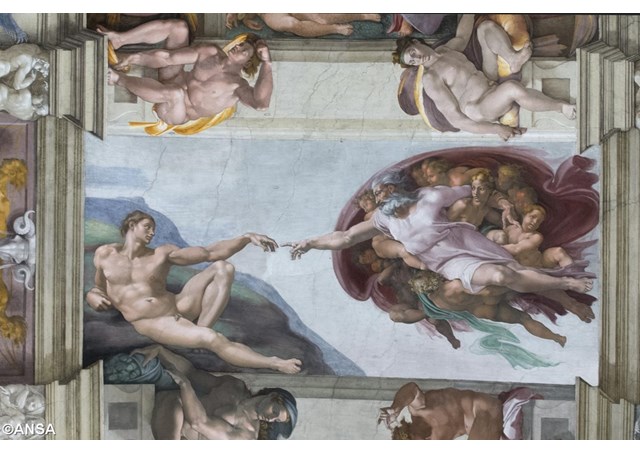 (Vatican Radio) A two day conference marking the 20th anniversary of the restoration of Michelangelo’s frescos in the Sistine Chapel opened on Thursday in Rome.

The conference will examine the current state of frescoes, as well as new methods being taken to protect the priceless artistic treasure.

On Wednesday evening in the Sistine Chapel the world’s media was invited to view the new lighting and air systems that have been installed, in order show the frescos off to their best advantage and protect the Chapel against humidity.

Lydia O'Kane was in the Sistine Chapel to see the result and spoke to Michel Grabon, Director of AdvanTE3C SC, Carrier HVAC Europe. Listen

According to the Director of the Vatican Museums the new lighting system is meant to provide a gentle but total illumination to the frescos but at the same time is non-invasive thus respecting the stylistic and historic reality of the Sistine Chapel.

The US-based company CARRIER has provided a state-of-the-art heating, ventilating and air-conditioning (HVAC) system for the Chapel, specially designed to address the challenges of protecting Michelangelo’s masterpieces against deterioration.

“…the system was extremely advanced, advanced in the sense that we have applied very very advanced technology, we have invented some of the technology to be able to fulfill very very complex requirements”, said Michel Grabon, Director of AdvanTE3C SC, Carrier HVAC Europe, who was in the Sistine Chapel on Wednesday evening and who worked on the project.

He went on to stress the importance on maintaining stable operating conditions inside the Chapel. “You can have 100 people, 2000 people inside, you know in a few minutes it can change, so it is extremely important to be able to respond to the change of the load in a very very quick time.”