Pope at Mass: Christian life is a continuous battle against the devil 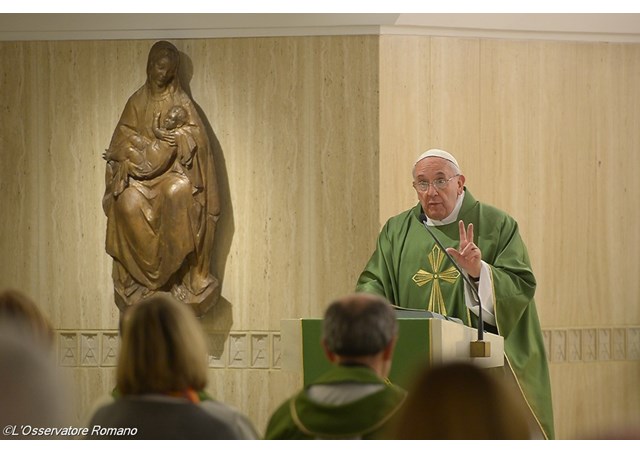 (Vatican Radio)  Pope Francis described Christian life as a continuous battle being waged against Satan, the world and the passions of the flesh. His comments came during his homily at Mass celebrated on Thursday morning at the Santa Marta residence. He stressed that the devil exists and we must fight against him with the armour of truth.

Pope Francis's reflections during his homily were taken from the words of St Paul in his letter to the Ephesians where the apostle urged Christians to put on the full armour of God in order to resist Satan’s temptations.  A Christian life, he said, has to be defended and it requires both strength and courage. It’s a continuous battle against the three main enemies of Christian life which are the devil, the world and the passions of the flesh.

“From whom do I have to defend myself? What must I do?  Pauls tells us to put on God’s full armour, meaning that God acts as a defence, helping us to resist Satan’s temptations.  Is this clear?  No spiritual life, no Christian life is possible without resisting temptations, without  putting on God’s armour which gives us strength and protects us.”

Saint Paul, continued the Pope, underlines that our battle is not against little things but against the principalities and the ruling forces, in other words against the devil and his followers.

“But in this generation, like so many others, people have been led to believe that the devil is a myth, a figure, an idea, the idea of evil. But the devil exists and we must fight against him.  Paul tells us this, it’s not me saying it! The Word of God is telling us this.  But we’re not all convinced of this.  And then Paul describes God’s armour and which are the different types that make up this great armour of God.  And he says: ‘So stand your ground,  with truth a belt around your waist.’  The truth is God’s armour.”

By contrast, said Pope Francis, the devil is a liar and the father of liars and in order to fight him we must have truth on our side.  He also underlined the importance of always having our faith in God, like a shield, when fighting this battle against the devil, who, he noted, doesn't throw flowers at us but instead burning arrows.

“Life is a military endeavour.  Christian life is a battle, a beautiful battle, because when God emerges victorious in every step of our life, this gives us joy, a great happiness: the joy that the Lord is the victor within us, with his free gift of salvation.  But we’re all a bit lazy, aren’t we, in this battle and we allow ourselves to get carried away by our passions, by various temptations. That’s because we’re sinners, all of us!  But don’t get discouraged.  Have courage and strength because the Lord is with us.”