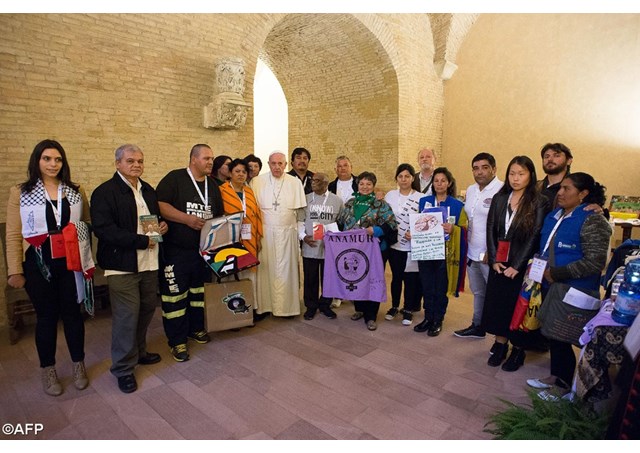 (Vatican Radio) Pope Francis met on Tuesday with participants in the World Meeting of Popular Movements which is holding a conference here in Rome to discuss problems facing the poor, the unemployed and those who’ve lost their land. The group chose to hold their three-day conference here because of Pope Francis’ particular attention to the struggles of the poor.

“This meeting of Popular Movements is a sign, a great sign,” Pope Francis told his audience. “You came to be in the presence of God, of the church… [to speak about] a reality that is often silenced. The poor not only suffer from injustice, but they also fight against it.”

The Holy Father also emphasized that it is not sufficient to be content with “illusory promises,” and that anesthetizing or taming problems at hand does not solve them. He called for solidarity amidst trying times. “Solidarity is a word that…means more than some generous, sporadic acts. It is to think and act in terms of the community…It is also to fight against the structural causes of poverty, inequality, unemployment, and [loss of] land, housing, and social and labour rights. It is to confront the destructive effects of the ‘Empire of Money:’ forcible displacements and migrations, human and drug trafficking, war, violence, and all of these realities that many of you suffer and that we all are called to address and transform. Solidarity, understood in its most profound sense, is a way of making history, and that is what the Popular Movements movement is doing,” he said.

Pope Francis spoke about the monopolization of land, deforestation, appropriation of water, and inadequate agrochemicals, which have deprived many farmers of sufficient land. He pointed out that in rural communities, land is ingrained in lifestyle and culture. For these afflicted farmers, separation from land is not purely physical, it is also “existential and spiritual,” he said. Additionally, the Pope said the need for agricultural reform is ingrained in the Church’s social doctrine. “Please,” he urged, “continue to fight for the dignity of rural families, for water, for life and for all that can benefit from the fruits of land.”

Also on the agenda were the problems of housing and employment. Insisting that every family has a right to a home, the Pope said, “Today there are many families without housing, either because they never had it or because they lost it for various reasons.” The Holy Father stressed that this was unacceptable; that in neighbourhoods families grow and plant their foundations. It is a shame, he said, that in large cities there is an abundance of neglect in regards to housing “millions of our brothers and neighbours, including children.”

The Pope went on to renounce the use of euphemisms to soften the harsh realities that plague society today. Specifically, he referred to the use of the term, “street situation,” which is used to describe the homeless. “We live in cities that build towers, malls, and businesses, but abandon the parts where the marginalized reside – the peripheries.”

Lastly, the Pope spoke about the growing problem of unemployment in Europe and around the world. “Today, the phenomenon of exploitation and oppression has taken on a new dimension,” he said. “The centre of our whole social and economic system needs to be about the person, the image of God, created for the universe.” Instead, we live in a world that is largely infatuated with the attainment of wealth, and that the economy is prioritized over the human person. He pointed out that the unemployment of the youth in Italy has reached 40%; and that in some parts of Europe, that number is even higher. “We need to change this,” he said. “We need to return to making human dignity the centre [of society]… and we need to create the alternative societal structures that we need.”

“I want to unite my voice with yours in this fight,” Pope Francis said to the group. “I know that among you are persons of different religions, professions, ideas, cultures, and continents. We are practicing here a culture of meeting that is removed from xenophobia, discrimination and intolerance that we so often see.”