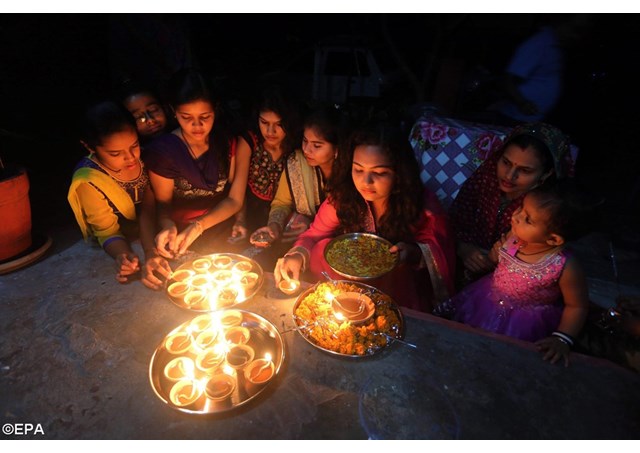 A group of Hindus have commended Vatican for its “message to Hindus for the feast of Deepavali”, extending joyful greetings “on the festive occasion of Deepavali”. Hindu statesman Rajan Zed, in a statement in Nevada (USA) on Wednesday, praised Vatican for wishing them “May the Transcendent Light illumine your hearts, homes and communities…” and desiring “harmony and happiness, peace and prosperity”.

One of the most significant and popular festivals in Indian culture, Diwali, the festival of lights, sees millions attend firework displays, prayers and celebratory events across the world every autumn. The festival is celebrated by Hindus, Sikhs and Jains for a variety of reasons, although the main theme which runs throughout is the triumph of light over darkness and good over evil.

To celebrate, houses are decorated with candles and colourful lights and huge firework displays are held while families feast and share gifts. A five day festival, Diwali is celebrated by millions of Hindus, Sikhs and Jains across the world. The festival, which coincides with the Hindu New Year, celebrates new beginnings and the triumph of good over evil and light over darkness. The actual day of Diwali is traditionally celebrated on the festival's third day, which this year falls on Thursday, October 23.

The festival usually falls between the middle of October and the middle of November, although this is decided upon by the Hindu lunar calendar. Those celebrating the festival light traditional earthen diyas (candles) and decorate their houses with colourful rangoli artworks - patterns created on the floor using coloured rice or powder. During Diwali, families and friends share sweets and gifts and there is also a strong belief in giving food and goods to those in need.

As Hindus worldwide celebrate Deepavali or Diwali, the Vatican had called on Hindus, Christians, followers ‎of other religions and people of good to foster together a culture of inclusion  for ‎a just and peaceful society.‎  In a message released on Monday,  the Vatican’s Pontifical Council for Interreligious Dialogue wished Hindus worldwide for this year’s Diwali.

“In the face of increasing discrimination, violence and ‎exclusion throughout the world, 'nurturing a ‎culture of inclusion' can be rightly ‎seen as one of the most genuine aspirations of people everywhere,‎” wrote Council president, Cardinal Jean-Louis Tauran ‎who signed the message.  The Vatican has urged all to join hands to foster a culture of inclusion for ‎a just and peaceful society.‎

Rajan Zed, who is president of Universal Society of Hinduism, extolled Vatican’s thought on the occasion, which stated: “Nurturing a culture of inclusion thus becomes a common call and a shared responsibility, which must be urgently undertaken.” And agreed with Vatican’s call given in the message: “…join together with followers of other religions and with people of good will to foster a culture of inclusion for a just and peaceful society.”

Zed urged His Holiness Pope Francis to visit a Hindu temple in the near future to promote mutual understanding and respect between the faiths. All religions should work together for a just and peaceful world, Zed stressed. Rajan Zed says that in our shared pursuit for the truth, we can learn from one another and thus can arrive nearer to the truth. This dialogue may help us vanquish the stereotypes, prejudices, caricatures, etc., passed on to us from previous generations. As dialogue brings us reciprocal enrichment, we shall be spiritually richer than before the contact, Zed adds.

Titled—Christians and Hindus: Together to foster a culture of “inclusion”—this Deepavali message was signed by President Cardinal Jean-Louis Tauran and Secretary Father Miguel Angel Ayuso Guixot of Pontifical Council for Interreligious Dialogue. Zed suggested that it would be even better if such messages were signed by Pope himself.