Call to action for 'Global Covenant of World Religions' 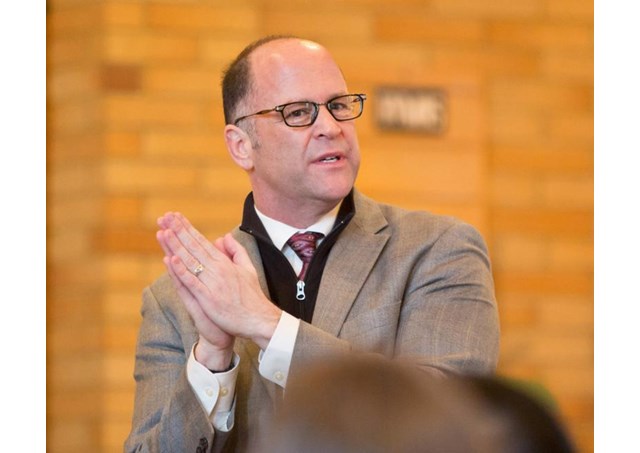 (Vatican Radio) Faced with the urgent crisis provoked by Islamic state extremists, faith leaders must work harder to prevent religiously motivated violence. That’s the view of Jerry White, deputy assistant Secretary of State in the U.S. government’s Bureau of Conflict and Stabilization Operations. White, who survived a landmine explosion in the Holy Land before starting to work in peace and victim support programmes, was in Rome recently to promote a call to action for a ‘Global Covenant of World Religions’.

While noting that governments and civil society organisations are an important part of any peace strategy, White believes faith leaders have a crucial role to play in combatting the alarming increase in religiously-motivated violence…

“Religion is a vocabulary that is being used, even every day as we look in the paper, to justify violence……religion has to be part of the solution—and that’s why a conversation about a new covenant, an interreligious peace treaty—what would that look like?

I think there may be weariness or cynicism of saying ‘been there done that’ since 1893, the World Parliament of Religions…a lot of interreligious initiatives have gone forth over the years…. I think what’s different is for such a time as this, when the violence proliferated so explicitly in the name of God, that can come into this ‘convert or die’ type of energy, that is the urgency that is new. We have to actually go beyond photo opportunities, beyond interfaith conferences, and say: What would our agreement look like in terms of an interreligious fatwa against violence. Can we have that conversation and actually in a way that goes beyond just prayers for peace?

What do you do with non-state actors? What do you do with this vocabulary that doesn’t seem to negotiate whatsoever, it’s not playing by the same rules. We have to revisit our strategies: So one of the ideas is for King Abdullah of Jordan for example, he would like to introduce a U.N Security Council Resolution to look at how you make the crimes of Isis, really crimes against humanity…

There are bits and pieces and streams of interfaith laws that talk about protection of people and religion but in fact it’s not working. What could be plussed up? There’s a civil society role as well…

I am an amputee because of a landmine explosion when I was a 20 year old hiking in the Holy Land …..after a month in the hospital I’ve developed gangrene. And it means I have to chop off a piece of my own body. I have to sign and wilfully amputate a piece of me that’s going to kill me if I don’t do anything… But the real important thing is to not get rid of the gangrene …but also the wellness of the body. What is happening in the Middle East? What is it about the rehabilitation in and between religions and communities and also governments that have not fulfilled their social contracts to the people.… There are times when the sickness is so sick that it must be dealt with. And I think that is what we are seeing in the coalition and basically in the world’s reaction to Isis—this requires military action but really that means it’s 20% of the game. Really 80% should be focused on an affirmative agenda for the wellness of the Middle East and also returning to the rule of law and governance and respect for difference.

What is the vision that we see? What is the new, brave world of political health, as well as security infrastructure in the Middle East that would matter? And then, reach out is the next part of recovery. That means no one does it alone. And I think President Obama has been so clear—reaching out multilaterally but also with partners, religious communities, civil society, it’s more than just a government or military game, obviously—so I think that’s really important. And lastly in terms of health and recovery for the region, but also for groups traumatized by war, is get moving. There are real things to do to train and equip to develop transitional justice and rule of law to actually start rebuilding in a way that would matter for the future….

I have always realized that the scale of most groups is not big enough to make a difference. But they sit on all sorts of recipes of success, all sorts of best practice, whether it would be reforming textbooks used in madrassas in Pakistan, to early warning in the role of women in Sierra Leone. So in fact the in gathering of best practice from the NGO and civil society groups who are on the front line, who are community based, they have the ingredients for success, they have the relationships on the front lines, that is critical. But in fact no one group really talks to the others….so part of the effort here, as you are hearing, is a three tiered process: interreligious—don’t ask them to be different but ask them to up their game in interfaith work; inter-government:  get the U.N to do better and also for us to stand by and protect civilians in danger, and then also civil society, share and disseminate your practice and lets have an ingathering of that as well…. The theory is that all three together, one plus one plus one, could equal thirty for this. And in fact the urgency of this issue requires us to try.

Why Rome is so important is it’s become an address by which people are projecting perhaps on to Pope Francis, the Catholic Church, but again the archetype of Saint Francis, who stood for peace, and was courageous enough to go, in the 13th century during the crusades, to reach out to a sultan - that archetype is actually interestingly been invoked. So I believe that a number of the world’s religious leaders are dropping through Rome more than ever before, and appealing for that type of neutral brokerage, a third side…..you’re seeing hopeful signs of people reaching out, courageous stands for peace and renunciation of violence…."