Chaldean Abp: a Mideast without Christians? 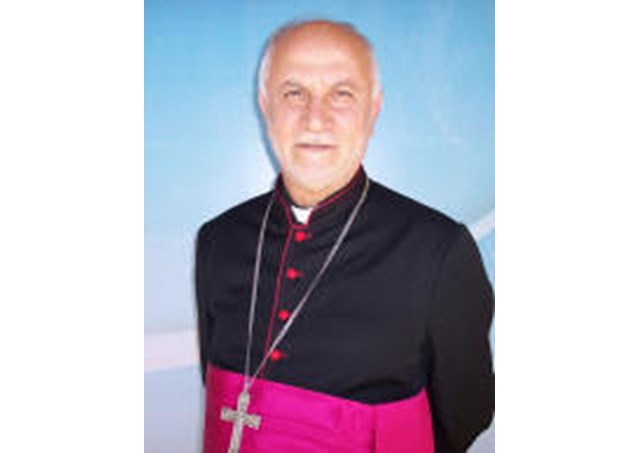 (Vatican Radio) A Middle East without its Christians would be like a garden without flowers: that’s what Chaldean Catholic Archbishop Thomas Meram of Urmyā, Deputy President of the Iranian Bishops Conference, says about the persecution of Christians in the region.  Jihadi militants like Islamic State (also known as ISIS or Daesh) in recent months have violently purged cities in Iraq and Syria of their Christians and other minorities.

The King expressed his solidarity with the region’s Christians, saying that said that the hatred, terrorism and fanaticism spread by extremist groups have nothing to do with the values the three monotheistic religions promote. He stressed the role of Christians in building Arab-Islamic identity throughout history and underlined Jordan's commitment to protecting the identity and existence of Arab Christians.

The Jordanian monarch has spearheaded numerous initiatives such as  the “Amman Message" and "Common Word," highlighting moderate and tolerant Islam. In September last year, he hosted another conference in Amman regarding the challenges facing Arab Christians.

It is not helpful that Christians have been described as “kaafir” or infidels for the last fourteen hundred years, says Archbishop Meram. “That’s not good.”  Speaking of many in the Arab world, he adds “you have to change your teaching in the schools regarding the minorities, Christian or non-Christian – to respect the human being.”  He underscores that state must also be separate from religion. “And it’s very hard I think.  They cannot do it.”

Many young men are leaving their countries to fight with organizations like Islamic State or Al Nusra or Al Qaeda-linked organizations.  Where does the role of education come into play in this phenomenon?

“I think this is brain washing.  Or money.  Or as they say, for sexual relations in heaven: you will get 40 virgin women.  I can’t understand it.  How can they (do this)?  Or they are an instrument in the hands of others using them.”

The misery of refugees

Archbishop Meram says he visited Christian refugees in three camps in Jordan hosting some forty to fifty families in each camp.  Other families he says, have rented places to stay but their money won’t last forever. “It’s miserable.  There is no human dignity – it’s lost now.  It is very miserable.”

He fans his arms out across the small conference room where we are speaking – it would be barely big enough to accommodate two double beds. In Jordan, parents and five or six children are sharing the same tiny space, with a sheet drawn across the room for some semblance of privacy, he says.  Still, Jordan is doing what it can, he notes.  “Since the Iraqi-Iranian war, Jordan (has been) like this: welcoming all the refugees.”

Airstrikes are not enough against militants

Archbishop Meram dismisses the international coalition’s airstrikes against Islamic State in Syria and Iraq as fruitless: “I think there is no use for that. Because (the militants such as) Daesh or Isis or Al Nusra - when there are strikes- they will dress like other people, like civilians.  You (won’t) recognize them.”

He admits he does not know what the solution to the region’s ills will be:  “I don’t know what’s going on; I’m not a politician but I pray for peace.  Like our Chaldean Church in Mosul for two thousand years – there were Christians (there).  We have a history there. But now it’s completely (wiped out) – no history.  Everything is destroyed.”

A place for Christians in the Middle East of tomorrow?

At their 2010 Synod, the Bishops of the Middle East reached out to Arab leaders, stressing that Christians want to be an integral part of their societies, contributing to their development and future.  To do so, they wish to be respected as full citizens with equal rights and with the freedom to practice their faith without prejudice or restrictions.  Since then, the region has erupted with the tumultuous uprisings of the Arab Spring and the rise of a new kind of ferocious Islamic extremism.  We asked Archbishop Meram if the bishops hold out hope for an equitable and just Middle East?

“It’s hard to answer this question.  I don’t think the Arab Spring – I would say Arab Winter – there’s no Spring.  Everything is fire, killing, bombarding, from Libya to Syria to Iraq to Yemen, to Saudi Arabia, Bahrain… it’s not a spring.  It’s going back one thousand four hundred years ago (to the origins of Islam).”

“We would like to be a part of these countries.  Because we (too) are the owners of the land over there,” says the Archbishop, recalling that the Christians were native to the land thousands of years even before Jesus Christ appeared. Christians want to stay in their homes and in their land, “but if by force or by fire they will kick us out, what can you do?  Just save your life and go out.  Save your life.  But we still have hope.  We are still in the country; we will never leave the country.  But if anybody would like to leave the country, we cannot oblige him to stay.  So he can choose to stay or leave.  But the Church will be over there I hope till the end of the world.”

A Middle East without its Christians, reflects Archbishop Meram, would be like “a garden without flowers. “