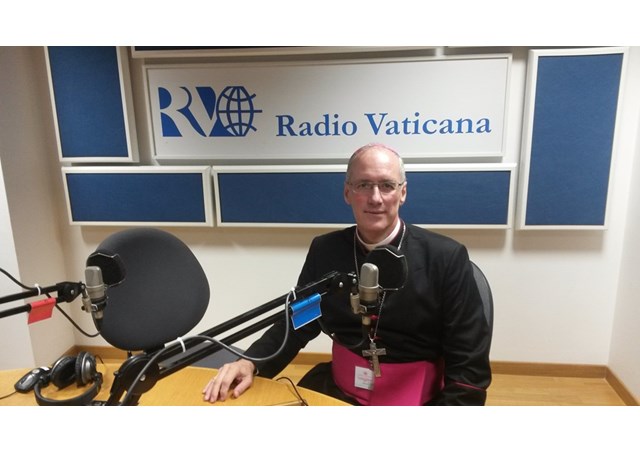 (Vatican Radio) Ahead of the presentation of the Synod’s final summary document, to be discussed and voted on Saturday afternoon by Synod participants, Synod Father Archbishop Paul-André Durocher shared with Vatican Radio some of the key points he thinks are important to include.

The first is the organization of all pastoral life in the Church in a way that includes the family, and not just having family as a segment of pastoral life, said the president of the Canadian Conference of Catholic Bishops.

The second is a pastoral approach that includes “the ability to see and develop what is good, even in situations that do not correspond to the ideal of the Church”.

Offering single-parent families and divorced and re-married couples as examples, he said: “There is much good going on there and we, as a Church, need to welcome that good and we need to support it.”

Addressing concerns previously expressed about how to bridge doctrine and ministry, he said the third key point is that issues related to Church and family are “not about justice versus mercy or about doctrine versus ministry”.

“These are not separate things in the life of the Church,” he continued. “We need to be able to find a way forward, where we see our doctrine as being full of mercy and we see the exercise of mercy rooted in our doctrine.”

The challenge, he said, is to tell the truth with hope. “That challenge is named in the relatio and I would like to see that continued on in the final document,” he offered.

The Archbishop of Gatineau, Quebec, also underlined two areas in the relatio, which he felt were problematic and needed working on.

“One bishop proposed a way of looking at the goodness that is in less-than-ideal situations in a way that would be analogous to the way that we look at Christian churches and ecclesial communities that are not fully in communion with the Catholic Church. This was developed, the idea of elements of ecclesiality,” he said. “I think that approach is problematic. Many bishops do and they feel that this is not the way forward, so we need to (work on) that.”

“The other thing is the language of graduality… what do we mean by that?” he said. “We need to define more clearly what we mean by graduality.”

On his personal blog, Archbishop Durocher had lamented the publication of the relatio prior to the language group discussions.

“My problem is not with the publishing of documents per se,” he explained. “I think it’s good that it be open. The problem is the lack of context in which it is released, the fact that a lot of media do not understand what is going on.”

Inaccurate headlines in Canadian newspapers about the relatio led some “very puzzled” Canadians to write him through social media and ask him what was happening at the Synod, “creating a certain amount of anxiety” among some Catholics, he reported.

Archbishop Durocher said the Synod’s summary document will be discussed on Saturday and voted on, but it will likely be some time before the final version is published.

“We’ve been told, this document becomes the basis for reflection and for dialogue in view of next year’s Synod,” he said. “But right away I feel a certain disconnect because this document is about the pastoral challenges of the family in the context of the new evangelization and the Pope has given a slightly different twist to next year’s Synod. He’s called for a reflection on the vocation and the mission of the Christian family in the Church and in the world, which is another aspect.

“So how does this document become the preparation for the next Synod? I think we’re going to have to look at that a bit more closely. I’m hoping the Secretariat of the Synod will  be able to enlighten us on this issue,” he added.

In the meantime, Archbishop Durocher said he has already called for a videoconference with the executive of the Canadian bishops conference so that “we can start right away brainstorming as to what are the next steps.”

He said he expects laymen and laywomen will be involved in the reflection, leading up to next year’s Synod.