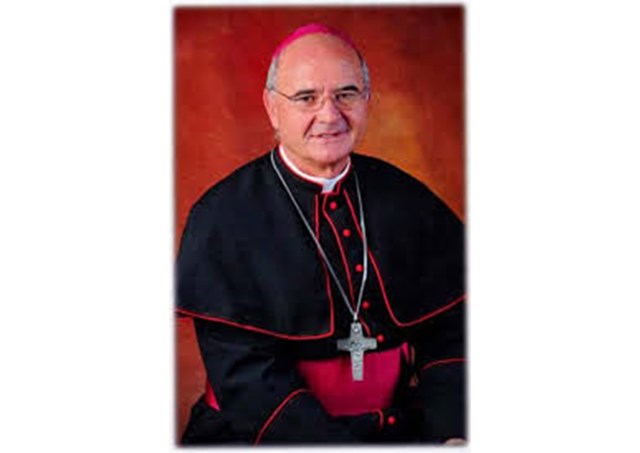 (Vatican Radio) The concerns and the challenges of the family in Southern Africa have been brought to the Synod arena by the Archbishop of Cape Town, Stephen Brislin, who is also the President of the Southern African Catholic Bishops Conference (SACBC).

Pointing out how hard Synod participants are working, with long and intense sessions that require much concentration and focus, Archbishop Brislin said the Synod is a wonderful opportunity to listen to first-hand accounts of different realities across the globe with the aim of finding ways of giving pastoral help to families in crisis. “Getting away from judging and condemning” he said “we have to find ways to give support” by finding and taking “what is good, and building upon that”.

Speaking to Vatican Radio’s Linda Bordoni, Archbishop Brislin said the social and family reality he and his brother bishops are faced with in Southern Africa is quite particular as, according to recent research, in South Africa there is no “typical” family…

On behalf of the SACBC Brislin says he presented the input and concerns about the pastoral concerns of families, noting that in his geographical area there is no such thing as a “typical” family in the sense that only 27 % of African children grow up in families where both biological parents are present.

That – he says – is just an example: “there are many broken families, many families experience abuse, conflict and violence, and we do realize that many children are growing up in families that are characterized by trauma and violence”.

Pointing to the fact that at the opening of the Synod Pope Francis invited all participants to speak freely and to listen carefully to the input of others – and Brislin says that it is his impression that everyone is doing just that, Brislin says “There is nobody pushing a particular ideology or a particular standpoint”.

Of course – he said -  people are bringing up their concerns and there is a great diversity, but he says he  believes people are listening and trying to understand the particular local circumstances brought to the forum.

Brislin says that because of its history and political past, the situation in Southern Africa is quite different to the situation in other Sub Saharan African Nations, but he notes, there are common threads – not only in Africa but throughout the world.

He points to the issue of divorce and separation which is a growing problem in Africa as it is in the rest of the world. But the example of polygamy – brought up by some of the other African Bishops – is a first for a Synod and he says it is a very interesting question.

Brislin agrees that inter-religious marriage and coexistence presents issues that are, generally speaking, not a problem in Southern Africa where – he says - there is a respect for the other. And in his experience the issues that come to the surface in mixed marriages are issues that can be sorted out pretty peacefully.

The Archbishop of Cape Town speaks very positively of the testimonies provided by the couples who have been invited to speak to the Synod Fathers of their thoughts and experiences which he says have been very helpful: “we should never forget this is a pastoral synod that recognizes that there are many families in pain, many families that are failing, that are seeking help, solace, comfort and consolation”.

Brislin says the issue of the effects of forced migration on families is a huge one at the Synod and it is coming out from a number of countries. South Africa – he says – deals with this problem because of the legacy of apartheid where so many families were forced apart, mainly because of work (men who worked on the mines were forced to leave their families for years at a time), and he says this continues today where people have to leave their families to seek work in the cities, and from this many problems derive with a huge impact on Southern African families.

“The whole Synod in a sense is going further than family life itself in it that it is asking itself: what sort of a Church should we be?” he said.

And finally, asked what he will be taking back with him once the Synod comes to a close Brislin said : “What I will be taking back to Cape Town and to South Africa is the urgency about having to find ways of giving pastoral help to families in crisis”.

“We have to get away from judging and condemning and to say how can we give support? How can we build? How can we take what is good and build upon that?” he said.

And if that message can get across and into our Parish communities then I think we really will become a better Church” he said.