Synod seeks to model God's marriage of justice and mercy 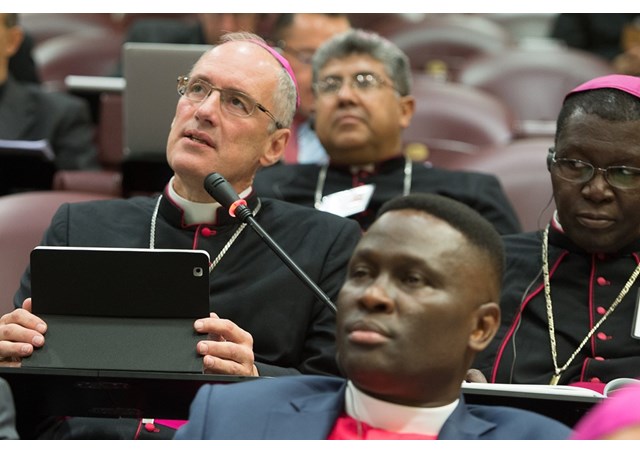 (Vatican Radio) How can the Church remain true to its core beliefs while showing mercy, compassion and forgiveness to individuals who fail, in so many ways, to live up its high ideals? That’s the question at the heart of the Synod of Bishops on the Family which is moving towards the conclusion of its first week’s work. To explore these issues at the daily press briefing on Thursday, the head of the Vatican press office Fr Federico Lombardi and his assistants were joined by the head of the Canadian Bishops’ Conference, Archbishop Paul-André Durocher and Italian Cardinal Francesco Coccopalmerio, as Philippa Hitchen reports....

‘Which of you, having a son or an ox that has fallen into a well on the Sabbath day, will not immediately pull him out?’ Those words of Jesus to the Pharisees were used by Cardinal Coccopalmerio on Thursday to throw light on the dilemma facing Synod Fathers as they struggle to distinguish between Church doctrine and its practical application to people in their care.

As a canon law professor and current president of the Pontifical Council for Legislative Texts, the Cardinal has spent most of his life studying the way the laws of the Church impact ordinary peoples’ lives.  He’s also a member of the new Commission, established by Pope Francis in September, to reform the marriage annulment process – one of the issues that has been under the spotlight in the Synod Hall…..

Like many other Church leaders, the cardinal is strongly in favour of simplifying the annulment process which is often a costly, complicated and drawn out affair. All the bishops at the Synod, are clear there will be no change to the Church’s teaching on the indissolubility of a Catholic marriage, but is much heated discussion on how to respond to men and women who are separated, divorced and remarried and are asking to be readmitted to the Eucharist.

Reflecting some of the many practical suggestions made by bishops, Fr Lombardi spoke of support networks, prayer services and public blessings which can help people move on from a failed marriage to a new sense of the Spirit working in their lives. Yet alongside these spiritual solutions, as Fr Tom Rosica explained, the bishops are wrestling with what it really means to be an incarnational and sacramental Church in which Jesus can touch and heal peoples’ hearts and lives..

"We must allow Jesus to do his work in the Eucharist because the Eucharist was left for us, sinners. We must not portray a Church which tries to put limits on God's love...."

The sense of urgency about resolving these issues is palpable during the Synod sessions. Bishops dealing with people in mixed Catholic-Orthodox marriages say there is much confusion over why the Eastern Churches can admit remarried spouses to the altar while Rome cannot. As Archbishop Durocher concluded, there’s a growing consensus that, amid so many economic and social challenges facing families today, the Church must be more open to meeting the particular needs of men, women and children in their care…

"What’s going on in the Synod is we’re seeing a more inductive way of reflecting, starting with the real situations of people… and finding that the lived experience of people is also a theological source, a place of theological reflection"

Not a battle between people and principles, he said, but rather the bishops are learning how to bring the requirements of justice and mercy closer together in a marriage made in heaven.

"A marriage of justice and mercy - God is perfectly just and perfectly merciful, it's just hard for us to do the same, but we must strive to do that."