Synod: The family from a Philippines perspective 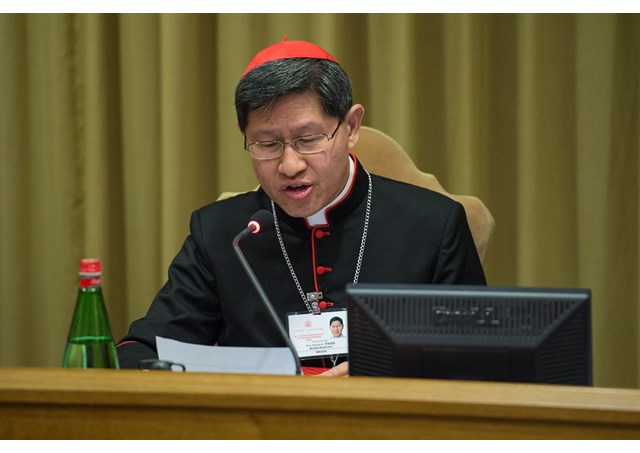 (Vatican Radio) Tuesday morning's session of the Synod on the Family saw the Philippines take centre stage as it was presided over by President Delegate Cardinal Luis Antonio Tagle, the Archbishop of Manila and heard the witness of a Filippino husband and wife.  The third General Congregation was entitled: The Gospel of the Family and  Natural Law  and Ramily and Vocation of the person in Christ.

Cardinal Tagle gave a brief introduction and presented the testimony of Mr. and Mrs. George Campos, from of Couples for Christ in the Philippines present at the synod as Auditors.

Please find below the presentation given for Cardinal Luis Tagle

In this Congregation, we shall treat Chapters Three and Four in the First Part of the Instrumentum laboris, namely,Communicating the Gospel of the Family in Today’s World. Under this heading is found Chapter Three entitled, The Gospel of the Family and the Natural Law. It covers numbers 20 to 49. To refresh your mind, this chapter treats the following topics:The Relation of the Gospel of the Family to the Natural Law (20); Practical Objections to the Natural Law concerning the Union between a Man and a Woman (27-29); and the Call for a Renewal in Terms of Language (30). Chapter Four, under the same heading, numbers 31 to 49, is entitled: The Family and Vocation of the Person in Christ. The subjects in this chapter are: The Family, the Person and Society (31-34); In the Image of Trinitarian Life (35); The Holy Family of Nazareth and Learning to Love(36-38); The Differences, Reciprocity and Manner of Living as a Family (39-42); The Family and the Integral Development of a Person (43-44); Guidance in the Renewed Desire to Marry and Form a Family and the Related Crises (45-48); and Ongoing Formation (49).

The interventions will be preceded by the personal, real-life testimony of Mr. and Mrs. George Campos. This husband and wife team come from my Archdiocese of Manila in the Philippines. Mr. Campos is a full-time pastoral worker; he is president and executive director of Couples for Christ. He holds a Bachelor of Science in Electrical Engineering and an Executive Masters in Business Administration. His wife Cynthia is a mission volunteer in the same pastoral programme of Couples for Christ. She has a Bachelor of Science in Psychology.

Couples for Christ (abbreviated as CFC) is an international Catholic lay ecclesial movement whose goal is to renew and strengthen Christian family life and values. It is one of 122 International Associations of the Faithful. The organization is affiliated and has official recognition by the Pontifical Council for the Laity. It is led by an International Council, which operates in the Philippines under the Catholic Bishops' Conference of the Philippines. The community is made up of family ministries, social arms, and a pro-life ministry.

Through the years, Couples for Christ has blossomed worldwide. It is now present in all 81 Philippine provinces and dioceses and it has been brought to 163 countries. It has become a major force for the renewal of Christian family life.

It mission statement reads: Families in the Holy Spirit Renewing the Face of the Earth. Moved by the Holy Spirit, one with the Catholic Church, blessed to witness to Christ’s love and service, Couples for Christ is a united global community of family evangelizers that sets the world on fire with the fullness of God’s transforming love.

Your Holiness,
Your Eminences,
Your Excellencies,
Brothers and Sisters in Christ,

Our Call to Vocation:

Cynthia and I were married in 1987, blessed with four children. In 1990, we became members of Couples for Christ, a Private Lay Association of the Faithful of Pontifical Right. We have committed ourselves to be a living catechesis of our vision to live as "Families in the Holy Spirit Renewing the Face of the Earth" and our mission: "Building the Church of the Home and of the Poor" in the 107 countries that we are present in.

Vocation Discernment: "I applied to be a nun with the Rosas Hermanas (Sister Servants of the Holy Spirit), a contemplative congregation. I was accepted, however, I was asked to undergo a one-on-one directed retreat with a priest. At the end of the retreat the priest said;"You are not meant for the religious life. God will give you a husband who will help you rear the children who will serve Him in the future. Your work is outside". After this seeming rejection from the Lord, I went back to school to finish my course. By the way, George was an altar server in the same convent I was applying to.

I attained a high stature in a company I was working with for 25 years. At age46, I opted to resign. I told the owner that "I have spent the 1st half of the prime of my life serving this company and now I want to spend the 2nd half serving the Lord." Cynthia at 47, resigned too, so we can serve together as a couple.

We have grown deeper in faith and love for the Lord through our teaching formations and weekly household prayer meetings with other couples. This blessed encounter with Jesus led us to become fulltime missionary disciples. Our children are following suit. They have joined the CFC Family Ministries beginning with Kids, Youth and Singles for Christ. We have been in missions together in Vietnam, Thailand and Australia.

Cynthia’s dangerous pregnancy: On my 4th pregnancy, I was diagnosed with gestational diabetes and preeclampsia. We were told that my life would beat risk if I continued the pregnancy and my child had a high probability of being born abnormal. We were advised to choose between terminating the pregnancy or taking the risk. It was truly a test of faith and surrender. We decided to have the baby and to abide by the will of God. By God’s grace, we both survived and my daughter Christen is now very healthy and full of life.

Breast Cancer Diagnosis In 1998, I was diagnosed with breast cancer with 3 to 6 months to live. Instead of letting go of our service, we continued, supported by the prayers of my family and our CFC community. My prayer was "Lord with just a flick of your finger you could change my illness. You just have to will it". God heard our prayers for now I am standing before you cured with a simple medical intervention and a dose of antibiotics.

The pastoral formation and support CFC gives strengthens and sustains us and our family in the daily challenges we face. But how about those who do not have the privilege of having a support group? And so our mission continues with greater passion.

CFC has ministries for matured men (Servants of the Lord) and women (Handmaids of the Lord) who are single, with spouses working abroad, who lost their spouses either through death, legal separation/divorce or a diverging view of associative Church groupings.

For couples in irregular situations, the JACOB’s WELL ministry was established. This was inspired from the conversation of Jesus with the Samaritan woman in the Gospel of John (4:1-42). It didn’t fare well due to mutually felt uneasiness and lack of interactive preparedness with regularly married couples and a Church advisory that our organization is meant only for couples married in Church.

An enlightened pastoral charity inaugurating innovative forms of "accompaniment", of conjugal spirituality formation and of inclusionary participation in church life leading to full communion needs promotion and enactment by our ordained ministers.