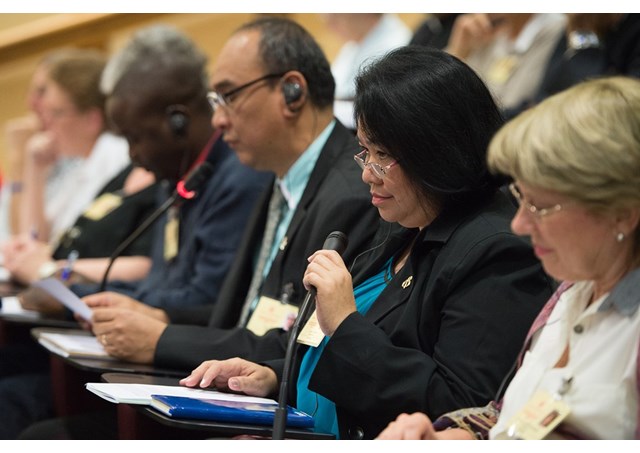 (Vatican Radio) At the daily press briefing in the Vatican on Tuesday, journalists heard how bishops meeting on the second full day of the Synod for the Family have been discussing the importance of using more inclusive language to talk about people living outside the teachings of the Church. They’ve also been stressing the need for a ‘gradual’ or ‘stepping stones’ approach to couples, and the recognition that elements of truth also exist in those relationships which do not conform to the Church’s ideal vision of family life.

The head of the Holy See press office Fr Federico Lombardi and his assistants spoke of the many different subjects under discussion on the first two days of the Synod, in particular the need for a more sensitive and inclusive language about family life that will not turn people away from the Church. Canadian Fr Tom Rosica gave some specific examples from the English speaking bishops present at the meeting:

“Language such as ‘living in sin,’ ‘intrinsically disordered,’ or ‘contraceptive mentality’ are not necessarily words that invite people to draw closer to Christ and the Church.”

Synod participants have also been underlining the need to apply the so-called ‘law of graduality’ or ‘stepping stones approach’ as they minister to people living in all kinds of relationships that do not conform to the Church’s ideal of marriage and family life.

Fr Lombardi used an analogy from the Second Vatican Council which led to profound changes in the Catholic Church’s relations with other Christians and people of other religious traditions. During the Council, bishops agreed that while the fullness of Christ’s Church “subsists” only in the Catholic Church, important elements of truth and holiness also exist in other churches and faith communities. In a similar way, he said, valid and important elements of true love and holiness can also exist in a relationship that does not conform to the full vision of an ideal Catholic marriage.

English Cardinal Vincent Nichols and Lebanese Cardinal Bechara Boutros Rai also shared impressions from the Synod Hall, including the call for a special message for families being persecuted for their Christian faith Iraq. They spoke about Synod Fathers who live in countries where Catholics are a tiny minority and who say the Church has much to learn from the wisdom and experience of other religious traditions.

Cardinal Nichols also described the very open and relaxed atmosphere of the Synod and the importance of hearing married couples share details of their relationships, including the pivotal role that sex plays in the life of most married couples

“The Australian couple were quite explicit and developed in their thought and emphasis on the central role of sexuality and sexual intercourse in their marriage – now that’s not what we bishops talk about mostly! But to hear that as the opening contribution did open up an area which others followed and it was a recognition that it is often central to the wellbeing of a marriage.”

Cardinal Nichols pointed out it’s too early to draw any conclusions from these first sessions, yet it does seem clear that this first Synod of Francis’ pontificate is shaping up for a much more honest and down-to-earth discussion than most bishops have experienced here in the Vatican over recent decades.