Apostolic Nuncio to Lebanon shares concerns for region in conflict 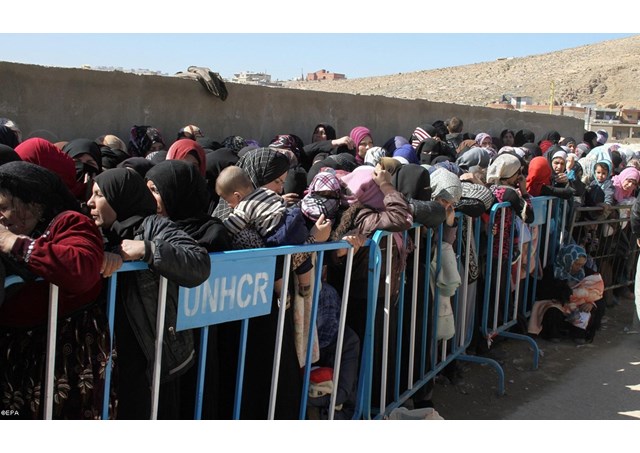 (Vatican Radio) “No more war, no more violations of human rights!”  That’s what the Holy See’s Apostolic Nuncio  to Lebanon says the international community needs to hear and act on as conflict rages across Syria and Iraq.  In an interview with Vatican Radio's Tracey McClure, Italian Archbishop Gabriele Caccia welcomed last week’s opportunity to meet with his other colleagues representing Jordan, Iraq, Syria, Turkey, Iran and Egypt in crisis talks in the Vatican 2-4 October.

The Nuncios shared information about the critical situations in their respective host countries with officials from Vatican offices directly involved in the Middle East crisis:  the Congregation for Eastern Churches, the Pontifical Councils for Interreligious Dialogue and Christian Unity, the Pontifical Councils for Justice and Peace, Care of Migrants and Itinerant People, and the Pope’s charitable office, Cor Unum.  The Permanent Observers of the Holy See to the United Nations in New York and Geneva, and the Vatican’s representative to the European Union were also present.

Archbishop Caccia said by calling the meeting, Pope Francis wanted to express his concern for the seriousness of the situation created in the last few months in the Middle East.

The “overwhelming result” of the meeting, Msgr. Caccia noted,  was “the consciousness of the magnitude” of the impact of the “wars going on in the region on the civil population: mass violations of human rights, countless children and women, and elderly people abandoned.  Millions of refugees abroad, millions of displaced people in their own countries… and most of all, no indication for a future of stability.”

While the meeting was due to focus on the impact of conflict on the Middle East’s Christian community, Msgr Caccia said the Nuncios reported that all of the region’s people are affected, majorities and minorities.  “Everybody is concerned and that’s unbearable.  So, the main message (that came out of the meeting) is no more war, no more violations of human rights,” he said.

Use of force against Islamic State

Regarding the international coalition of some forty countries combatting Islamic State militants in Iraq and Syria, Archbishop Caccia recalled Pope Francis’ comments on his flight back to Rome from Korea: “The Holy Father has said…that the international community has a responsibility to stop the aggressor according to international law.”

“There are mechanisms,” Msgr. Caccia added, “to find a consensus to protect the civilian population which is unarmed, which is without protection since the state is not able to protect them.  And, we face a new reality which goes beyond the borders of a single state.”

Archbishop Caccia expressed hope that “this consensus to protect the civil population will be found according to the international law. And maybe this gives occasion also to go a little bit beyond what has already been done.”

Msgr Caccia says his concerns for Lebanon include the internal strain of housing, feeding, educating and caring for the 1.5 million Syrian refugees who have flooded the country of 4 million.  Security is another concern.

The Syrian conflict has spilled over into its neighbor, threatening security and raising tensions in Lebanon. Sunni extremist groups including Islamic State and Al Nusra Front have for weeks been waging fierce battles against the Lebanese army in and around Arsal, not far from Lebanon’s northern border with Syria.  Dozens of Lebanese soldiers, police and civilians have been kidnapped, and some killed.  A series of car bombs late last year and into 2014 targeted Beirut suburbs considered strongholds of Hezbollah, the armed Lebanese Shiite political group which has poured fighters and weapons into Syria in support of President Bashir al Assad’s battle against Sunni rebels.  Lebanon’s Christians too are divided, at a stalemate in choosing a candidate to replace President Michel Suleiman whose mandate expired in May this year.

Lebanon as a model of pluralism, coexistence

Despite the tensions, Archbishop Caccia remains optimistic:  “I would say Lebanon, in this very moment, also gives hope for all the region because it is the only country where there is a share of power among all the 17 different faith communities, where all are accepted, all have (a voice), and all together they can decide (policies) for the good of the nation.”

It’s the same power-sharing formula, he says, that both the international community and the region have been seeking, particularly in response to the conflicts in Iraq and Syria. “So in that sense, Lebanon can give hope that it’s possible to live together, all communities, all faiths, with respect and I would say even more: with understanding and mutual help.”

Msgr. Caccia points to concrete actions which have brought the different faith communities together.  Lebanon’s Muslim community, he said, share the concerns of Christians “about the humanitarian problems and the atrocities and there were some statements of condemnation.”  “We are not enemies but we are partners (in building) a more just society.  And all forces which want to build on human dignity, on freedom, on respect, are really welcome and in that sense, I would also like to thank (our) Muslim counterparts because they are going in the right directions to build a just country for everybody.”

Partnership, Archbishop Caccia concluded, is key to finding a lasting peace in the region.   “We can get out of these troubles only together- not one against the other, but each one together with the other. In that sense, Lebanon could also be a very good example of hope for the future of the region.”