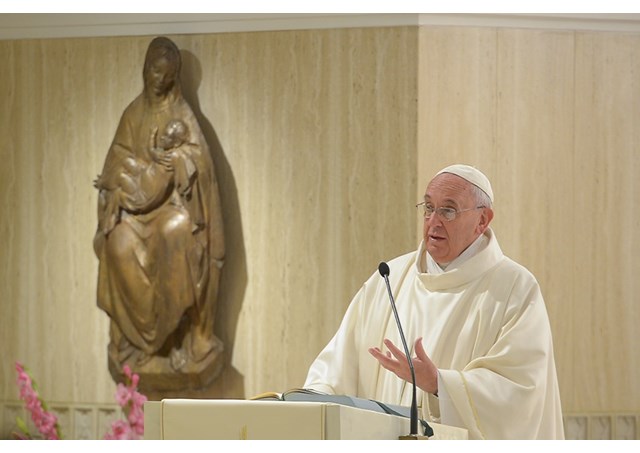 (Vatican Radio) In moments of darkness, our lament becomes a prayer, but we must guard ourselves against overdramatizing our complaints and remember that there are people experiencing “great tragedies” who have good reason to lament, like the Christians driven from their homes for the faith, said Pope Francis Tuesday during Mass at Casa Santa Marta.

Reflecting on the First Reading of the day, in which Job curses the day he was born, the Pope noted that his prayer at first appears to us like a curse. Pope Francis recalled how Job was “put to the test”, how he “lost his entire family, everything he possessed”, how he lost his health and “his body had become a plague, a disgusting plague". The Pope said in that moment "he had lost all patience and he says these things. They are ugly! But he was always accustomed to speak the truth and this is the truth that he feels at that moment”. Pope Francis recalled how even Jeremiah, "uses almost the same words: 'Cursed be the day I was born!'", and then he asked: "But is this man blaspheming? This is my question: Is this man who is so very alone, blaspheming?”.

"Is it blasphemy when Jesus complains - 'Father, why have You forsaken me’? This is the mystery. I have often listened to people who are experiencing difficult and painful situations, who have lost a great deal or feel lonely and abandoned and they come to complain and ask these questions: Why? Why? They rebel against God. And I say, 'Continue to pray just like this, because this is a prayer'. It was a prayer when Jesus said to his father: 'Why  have You forsaken me!'".

The Pope continued that what Job is doing in the First Reading is praying, because prayer means being truthful before God. This was the only way Job could pray. "We should pray with reality - he added - true prayer comes from the heart, from the moment that we are living in". "It is prayer in times of darkness, in those moments of life that seem hopeless, where we cannot see the horizon". "And so many people, so many today, are in the same situation as Job. So many good people, just like Job, do not understand what has happened to them, or why. Many brothers and sisters who have no hope. Just think of the tragedies, the great tragedies, for example, of these brothers and sisters of ours who because they are Christians were driven out of their homes and left with nothing: 'But, Lord, I have believed in you. Why? Is believing in you a curse, Lord? '".

"Just think of the elderly who are sidelined - he continued - think of the sick, of the many lonely people in hospitals". The Pope assured that the Church prays for all of these people and for those of us when we walk in darkness. “The Church prays! She takes this pain upon herself and prays". And those of us who “are not sick, or hungry, who have no pressing needs, when we suffer a little darkness of soul, act like martyrs and stop praying”.

The Pope continued that there are even those who say: "I am angry with God, I will not go to Mass". "But why? Over some trifling thing” is the answer. Pope Francis recalled that St. Therese of the Child Jesus, in the last months of her life, "tried to think of heaven, but heard a voice within herself, telling her not to be silly, not to be led astray by fantasies. Do you know what awaits you? Nothing!”.

"We all go through this situation, we experience this situation. There are so many people who think it all ends in nothing.  Yet Saint Teresa, prayed and asked for strength to persevere in the dark. This is called entering into patience. Our life is too easy, our complaints are overdramatized. Faced with the complaints of so many people, of so many brothers and sisters who are in the dark, who have almost lost all memory, almost lost all hope – who are experiencing this exile from themselves, who are exiled, even from themselves - nothing! Jesus walked this path: from sunset on the Mount of Olives to the last word from the Cross: 'Father, why have you forsaken me!”.

Pope Francis concluded that there are two things that can help in such situations: “First, to prepare ourselves for when the darkness comes” which perhaps, will not be as hard as that of Job, “but which will come.  Prepare your heart for that moment". Second: "Pray, pray as the Church prays, pray with the Church for so many brothers and sisters who suffer exile from themselves, who are in darkness and suffering, without hope at hand." It is the prayer of the Church for these ‘Suffering Jesus’ who are everywhere".