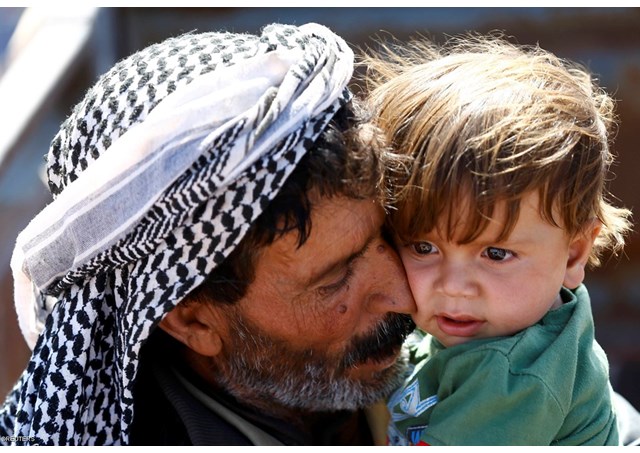 (Vatican Radio)  As Turkey struggles to manage the sudden influx of tens of thousands of Kurds fleeing advancing Islamic State militants in Syria, the United Nations' Refugee agency UNHCR estimates there are already more than 800,000 Syrian refugees in Turkey.  The U.N. agency expects that number to rise to 1.5 million by the end of the year.  More than 50,000 Iraqis are also waiting to register for refugee status and more are waiting across the border.

Caritas Turkey is doing what it can to help: providing emergency relief and education, development, and social support for refugees.

Tracey McClure spoke to Caritas Turkey volunteer Chiara Rambaldi who says of the Iraqi refugees who receive Caritas assistance in Istanbul, the vast majority are Christians who fled persecution by Islamic State extremists: “The newcomers come from the region of Mosul and Ninevah and their stories are very, very (disturbing).”

Rambaldi says the Iraqi Christians have brought with them terrible stories of beatings and of having to abandon their homes and shops to looters.  “Basically they were just forced to leave – there was no chance that they could continue living there.”  And after having fled their villages, many of these families had to move from one place to another, again leaving behind whatever little they had brought with them.  “So they are without anything now.”  Some are elderly with medical problems, and have very limited resources and little to no access to health care.

“The fact that they are Christian is an extra issue,” Rambaldi affirms.  A majority Muslim country, Turkey made a “huge humanitarian effort” for the Syrians, she notes, “building  camps, keeping the border open, and providing services for years and years.”  “Being a refugee is already difficult and being Christian is also a bit more challenging in terms of possibility for integration, for communication, and normal daily life.”

Many refugees have gravitated to Turkey’s larger towns close to the southern border and to big cities like Istanbul, Izmir and Ankara, Rambaldi explains. “For example in Istanbul, they are finding the cheapest places in the city and also for them there is quite a discrimination in terms of rent prices or the kind of houses they can find.  So it’s not uncommon that more families share the same houses where there are very, very crowded living solutions or they can only pay the rent for a while and then they need to go out and look for an even cheaper place.”  She adds that people are also living on the street and in parks because they are not able to afford any kind of “stable accommodation.”  “Shelter is really a serious, serious problem.”

Caritas Turkey is gearing up to provide more assistance to Iraqi refugees who continue to flow into Istanbul.  It is also preparing a strategy to assist Syrian Kurds now massing at Turkey’s border.

The overwhelming  number of refugees in Turkey has increased social tensions in the country, admits Rambaldi.  “In my opinion, Turkey has been extremely welcoming.  Because if you think of the numbers, and also from the stories of the refugees: we often hear of a Turkish neighbor helping a refugee family with furniture or of children integrating…”   “But at the same time, the Turkish media is speaking of increasing tensions and even demonstrations and aggression especially against Syrians.”  The job and housing markets have also been impacted, she says.  “It’s not difficult to foresee that it needs to be managed because the situation will continue to get tense.”

Refugee children missing out on school

Refugee children have access to education, Rambaldi notes, “but in practice it’s quite different.  A Yazidi child from Iraq can go to a public school as long as his family completed the registration procedure with the local authorities – the police or migration department – and if UNHCR obtains the residency permit - and then their kids can go to school.  These procedures are not impossible but (are) quite long, quite complicated in some cases - even costly because they are assigned to some cities to live  - plus, even if they go to school, there is the language barrier. Because mostly they speak Arabic or for example, Farsi – there are a lot of Afghans and Iranians in Turkey who (also) live in very, very difficult conditions.  And there are no special support classes or integration classes so a lot of children are simply not going to school.  Or, (they go) “to informal schools, or go to schools as guests because maybe the director of the school accepted them - but that will not allow them to have an official diploma to continue their education maybe in another country.”

Pope Francis is expected to visit Turkey at the end of November 2014 for a visit to the Ecumenical Patriarch Bartholomew I, spiritual head of the Orthodox world.  There is a possibility that during that trip, he may visit refugees in the border area.

“Caritas, as an organization of the Catholic Church, is very much concerned by the situation of Christians in the Middle East,” observes Rambaldi.  A papal visit to the refugees, she says, would be a “highly symbolic decision that would attract a lot of attention” and “would offer a sign of hope for these people because what we are seeing is that a lot of people are losing hope” that the situation will ever be stable and safe enough for them to return home.