Pope at Santa Marta: The angels defend us 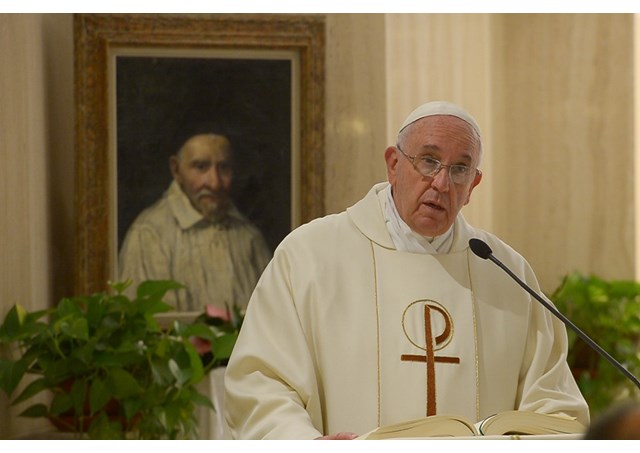 (Vatican Radio) The angels battle Satan for the destiny of mankind and win.  They defend and custody  the greatest mystery of the Church, God-made-Man.  Even though in Satan often presents “humanistic explanations” for his attacks on mankind.  This was the focus of Pope Francis homily at Mass Monday morning at Casa Santa Marta, marking the Feast of the Holy Archangels Michael, Gabriel and Raphael.

Today’s readings present us with very strong images: the vision of the glory of God described by the prophet Daniel with the Son of Man, Jesus Christ, before the Father: the archangel Michael and his angels fighting against "the great dragon, the ancient serpent, he who is called the devil" and "seduces all of inhabited earth," but who is defeated, as affirmed by the Book of Revelation; and the Gospel in which Jesus says to Nathanael: "You will see heaven opened and the angels of God ascending and descending upon the Son of man". Pope Francis speaks of "the struggle between God and the devil":

"This struggle takes place after Satan seeks to destroy the woman about to give birth to a child. Satan always tries to destroy man: the man that Daniel saw there, in glory, and whom Jesus told Nathanael would come in glory. From the very beginning, the Bible speaks to us of this: Satan’s [use of ] seduction to destroy. Maybe out of envy. We read in Psalm 8: 'Thou hast made ​​man superior to the angels,' and that angel of great intelligence could not bear this humiliation, that a lower creature was made superior to him; thus he tried to destroy it".

Satan, therefore, seeks to destroy humanity, all of us:

"So many projects, except for one's own sins, but many, many projects for mankind’s dehumanization are his work, simply because he hates mankind. He is astute: the first page of Genesis tells us so, he is astute.  He presents things as if they were a good thing.  But his intention is destruction. And the angels defend us. They defend mankind and they defend the God-Man, the superior Man, Jesus Christ who is the perfection of humanity, the most perfect. This is why the Church honors the Angels, because they are the ones who will be in the glory of God – they are in the glory of God - because they defend the great hidden mystery of God, namely, that the Word was made flesh".

"The task of the people of God - the Pope said - is to safeguard man: the man Jesus” because "He is the man who gives life to all men". Instead, in his plans for destruction, Satan has invented "humanistic explanations that go against man, against humanity and against God":

"This struggle is a daily reality in Christian life, in our hearts, in our lives, in our families, in our people, in our churches ... If we do not struggle, we will be defeated. But the Lord has given this task mainly to the angels: to do battle and win. And the final song of Revelation , after this battle, is so beautiful: Now have salvation and power come, and the kingdom of our God and the authority of his Anointed. For the accuser of our brothers is cast out, who accuses them before our God day and night”.

Pope Francis concluded urging those present to pray to the archangels Michael, Gabriel and Raphael, and "recite the ancient but beautiful prayer to the archangel Michael, so he may continue to do battle and defend the greatest mystery of mankind: that the Word was made Man, died and rose again. This is our treasure. That he may battle on to safeguard it".