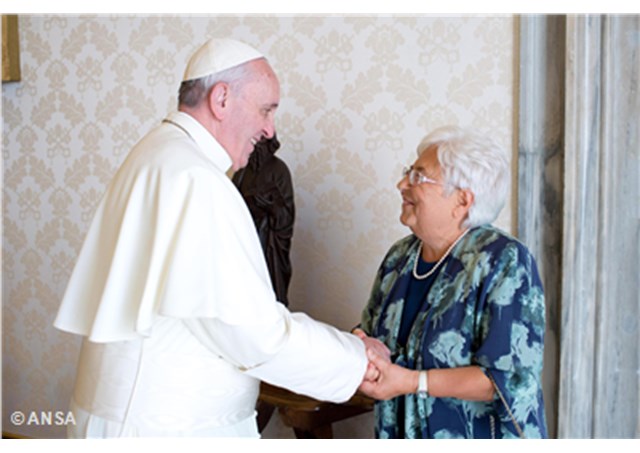 (Vatican Radio) Pope Francis met on Friday with leaders of the Focolari movement who are holding their General Assembly at Castel Gandolfo from September 1st to 28th. Half a century on from the Second Vatican Council, he said, they are called, with the whole Church, to follow a new path of evangelisation, witnessing God’s love to all and in particular to the poor and most marginalised.

Greeting especially the Focolari president, Maria Voce, who has been elected to a second term of office, the Pope said the movement was born from a tiny seed in the Church and has grown into a tree whose branches spread through all kinds of Christian families and through all different religions as well.

Pope Francis said the movement, which is also known as the Work of Mary, flowed from a particular gift of the Holy Spirit which is the charism of unity. The Focolari founder, Chiara Lubich, he said, was an extraordinary witness to that gift which she spread to so many different parts of the world.

The Pope also offered three words upon which all members of the movement can base their efforts as they seek to contribute to the work of challenging task of evangelisation today. Firstly, he said, contemplation is an indispensable condition for effective action. Secondly, he said, they must go out in a spirit of dialogue, giving freely of themselves just as Jesus gave his life for us on the Cross. Finally, the Pope stressed the importance of forming young people, so that they too can serve the needs, concerns and hopes of men and women in the world today.