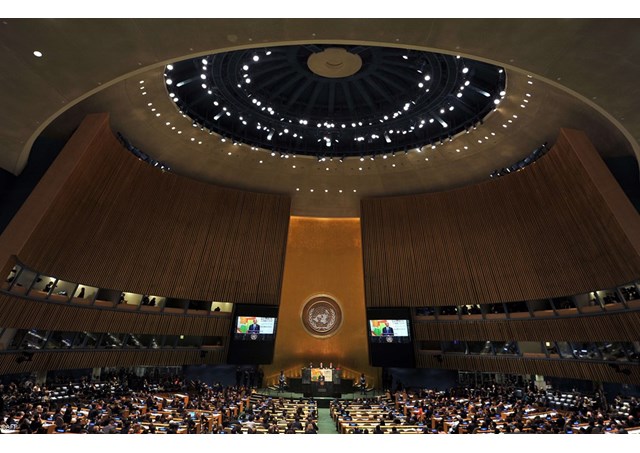 (Vatican Radio)  The Holy See has called for “an authentic cultural change” to combat climate change which is man-made and therefore man’s responsibility.

That was the focus of an address delivered Tuesday evening to the UN Climate Change Summit in New York by the Vatican Secretary of State Cardinal Pietro Parolin.

Below the full text of Card. Parolin’s Statement:

I am pleased to convey the cordial greetings of His Holiness Pope Francis to all those here present for this important Summit, which has gathered together high governmental and civil officials, as well as leaders from the private sector and civil society, in order to identify significant initiatives that will address the concerning phenomenon of climate change. It is well known that climate change raises not only scientific, environmental and socio-economic considerations, but also and above all ethical and moral ones, because it affects everyone, in particular the poorest among us, those who are most exposed to its effects.

For this reason, the Holy See has often stressed that there is a moral imperative to act, for we all bear the responsibility to protect and to value creation for the good of this and future generations. Pope Francis, from the beginning of his Pontificate, has underlined the importance of “protecting our environment, which all too often, instead of using for the good, we exploit greedily, to one another’s detriment” (Address to the Diplomatic Corps accredited to the Holy See, 22 March 2013).

The scientific consensus is rather consistent and it is that, since the second half of the last century, warming of the climate system is unequivocal. It is a very serious problem which, as I said, has grave consequences for the most vulnerable sectors of society and, clearly, for future generations.

Numerous scientific studies, moreover, have emphasized that human inaction in the face of such a problem carries great risks and socio-economic costs. This is due to the fact that its principal cause seems to be the increase of greenhouse gas concentrations in the atmosphere due to human activity. Faced with these risks and costs, prudence must prevail, which requires thoughtful deliberations based on an accurate analysis of the impact our actions will have on the future. This requires a great political and economic commitment on the part of the international community, to which the Holy See wishes to make its own contribution, being aware that “the gift of knowledge helps us not to fall into attitudes of excess or error. The first lies in the risk of considering ourselves the masters of creation. Creation is not some possession that we can lord over for own pleasure; nor, even less, is it the property of only some people, the few: creation is a gift, it is the marvellous gift that God has given us, so that we will take care of it and harness it for the benefit of all, always with great respect and gratitude” (Pope Francis, General Audience, 21 May 2014).

The long debate on climate change, which gave rise in 1992 to the United Nations Framework Convention on Climate Change and its subsequent implementation, shows how complex this issue is. Since then until our own day, much has changed: the dynamics of international relations have given life to changing geopolitical contexts, while the scientific and informational technologies have become extremely refined.

A principle element which has emerged from the more than thirty years of study on the phenomenon of global warming is the increasing awareness that the entire international community is part of one interdependent human family. The decisions and behaviours of one of the members of this family have profound consequences for the others; there are no political frontiers, barriers or walls behind which we can hide to protect one member from another against the effects of global warming. There is no room for the globalization of indifference, the economy of exclusion or the throwaway culture so often denounced by Pope Francis (cf. Apostolic Exhortation Evangelii Gaudium, 52, 53, 59).

In the actions undertaken to counter global warming we have too often seen the predominance of special interests or so-called “free-riders” over the common good; we have too often noted a certain suspicion or lack of trust on the part of States, as well as on the part of other participants. However, if we really wish to be effective, we must implement a collective response based on a culture of solidarity, encounter and dialogue, which should be at the basis of normal interactions within every family and which requires the full, responsible and dedicated collaboration of all, according to their possibilities and circumstances.

In this regard, it seems opportune to recall a concept which was also developed within the forum of the United Nations, that is, the responsibility to protect. States have a common responsibility to protect the world climate by means of mitigation and adaptation measure, as well as by sharing technologies and “know-how”. But above all they have a shared responsibility to protect our planet and the human family, ensuring present and future generations have the possibility of living in a safe and worthy environment. The technological and operational bases needed to facilitate this mutual responsibility are already available or within our reach. We have the capacity to start and strengthen a true and beneficial process which will irrigate, as it were, through adaptation and mitigation activities, the field of economic and technological innovation where it is possible to cultivate two interconnected objectives: combating poverty and easing the effects of climate change.

Market forces alone, especially when deprived of a suitable ethical direction, however, cannot resolve the interdependent crisis concerning global warming, poverty and exclusion. The greatest challenge lies in the sphere of human values and human dignity; questions which regard the human dignity of individuals and of peoples are not able to be reduced to mere technical problems. In this sense, climate change becomes a question of justice, respect and equity, a question which must awaken our consciences.

The ethical motivations behind every complex political decision must be clear. At present, this means consolidating a profound and far-sighted revision of models of development and lifestyles, in order to correct their numerous dysfunctions and deviations (cf. Benedict XVI, Encyclical Letter Caritas in Veritate, 32). This is also needed due to the many crises which present society is living in economic, financial, social, cultural and ethical contexts.

Within this perspective, an authentic cultural shift is needed which reinforces our formative and educational efforts, above all in favour of the young, towards assuming a sense of responsibility for creation and integral human development of all people, present and future.

For its part, Vatican City State, though small, is undertaking significant efforts to reduce its consummation of fossil fuels, through diversification and energy efficiency projects. However, as the Holy See’s delegation at the COP-19 in Warsaw indicated, “talking about emission reductions is useless if we are not ready to change our lifestyle and the current dominant models of consumption and production”. The Holy See attaches great importance to the need to promote education in environmental responsibility, which also seeks to protect the moral conditions for an authentic human ecology. There are many Catholic educational institutions, as well as Bishops’ Conferences, dioceses, parishes and Catholic inspired NGOs committed to this work in the conviction that the deterioration of nature is directly linked to the culture which shapes human coexistence. Respect for environmental ecology is a condition of, and conditioned by, respect for human ecology in society.

Confronting seriously the problem of global warming requires not only strengthening, deepening and consolidating the political process on a global level, but also intensifying our commitment to a profound cultural renewal and a rediscovery of the fundamental values upon which a better future for the entire human family can be built. The Holy See commits itself to this end, so that, in this work, the international community may be guided by the ethical imperative to act, inspired by the principles of solidarity and the promotion of the common good, in the knowledge that “the dignity of each human person and the pursuit of the common good are concerns which ought to shape all economic policies” (Evangelii Gaudium, 203).