Pope to Albanians: do not be afraid of responding to Christ 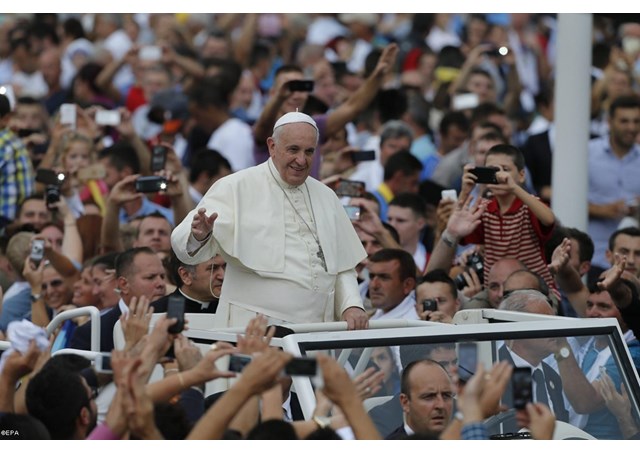 (Vatican Radio) Pope Francis on Sunday encouraged the people of Albania to cultivate hope and involve the young generations, opening their hearts to Christ and fulfilling their roles in the Church and in society.

In his homily during Mass in Tirana’s Mother Teresa Square, Pope Francis recalled the witness of the Albanian martyrs and the terrible suffering of persecuted Catholics, Orthodox and Muslims.

Commenting on the fact that the Albanian population is a young one, he urged all Albanians not to forget the wounds of the past, but to go forward and fly high on the wings of hope for a great future.

Please find below the full text of the Pope’s homily:

Today’s Gospel tells us that, as well as the Twelve Apostles, Jesus calls another seventy-two disciples and that he sends them to the villages and cities to announce the Kingdom of God (cf. Lk 10:1-9, 17-20).  He comes to bring the love of God to the world and he wishes to share it by means of communion and fraternity.  To this end he immediately forms a community of disciples, a missionary community, and he trains them how to “go out” on mission.  The method is both clear and simple: the disciples visit homes and their preaching begins with a greeting which is charged with meaning: “Peace be to this house!”.  It is not only a greeting, but also a gift: the gift of peace.  Being here with you today, dear brothers and sisters of Albania, in this Square dedicated to a humble and great daughter of this land, Blessed Mother Teresa of Calcutta, I wish to repeat to you this greeting: May peace be in your homes! May peace reign in your hearts! Peace in your country!

In the mission of the seventy-two disciples we see a reflection of the Christian community’s missionary experience in every age: the risen and living Lord sends not only the Twelve, but the entire Church; he sends each of the baptized to announce the Gospel to all peoples.  Through the ages, the message of peace brought by Jesus’ messengers has not always been accepted; at times, the doors have been closed to them.  In the recent past, the doors of your country were also closed, locked by the chains of prohibitions and prescriptions of a system which denied God and impeded religious freedom.  Those who were afraid of the truth did everything they could to banish God from the hearts of men and women and to exclude Christ and the Church from the history of your country, even though it was one of the first to receive the light of the Gospel.  In the second reading, in fact, we heard a reference being made to Illyria, which in Paul’s time included the territory of modern-day Albania.

Recalling the decades of atrocious suffering and harsh persecutions against Catholics, Orthodox and Muslims, we can say that Albania was a land of martyrs: many bishops, priests, men and women religious, and laity paid for their fidelity with their lives.  Demonstrations of great courage and constancy in the profession of the faith are not lacking.  How many Christians did not succumb when threatened, but persevered without wavering on the path they had undertaken!  I stand spiritually at that wall of the cemetery of Scutari, a symbolic place of the martyrdom of Catholics before the firing squads, and with profound emotion I place the flower of my prayer and of my grateful and undying remembrance.  The Lord was close to you, dear brothers and sisters, to sustain you; he led you and consoled you and in the end he has raised you up on eagle’s wings as he did for the ancient people of Israel (cf. First Reading).  The eagle, depicted on your nation’s flag, calls to mind hope, and the need to always place your trust in God, who does not lead us astray and who is ever at our side, especially in moments of difficulty.

Today, the doors of Albania have been reopened and a season of new missionary vitality is growing for all of the members of the people of God: each baptized person has his or her role to fulfil in the Church and in society.  Each one must experience the call to dedicate themselves generously to the announcing of the Gospel and to the witness of charity; called to strengthen the bonds of solidarity so as to create more just and fraternal living conditions for all.  Today, I have come to encourage you to cultivate hope among yourselves and within your hearts; to involve the young generations; to nourish yourselves assiduously on the Word of God, opening your hearts to Christ: his Gospel will show you the way!  May your faith be joyful and bright; may you demonstrate that the encounter with Christ gives meaning to human existence, meaning to every man and woman.
In the spirit of communion among bishops, priests, consecrated persons and laity, I encourage you to bring vitality to your pastoral activities and to continuously seek new ways of making the Church present in society: do not be afraid to respond generously to Christ who invites you to follow him!  In a priestly or religious vocation you will find the richness and the joy of offering yourselves to the service of God and your brothers and sisters.  How many men and women await the light of the Gospel and the grace of the Sacraments!

To the Church which is alive in this land of Albania, I say “thank you” for the example of fidelity to the Gospel!  So many of your sons and daughters have suffered for Christ, even to the point of sacrificing their lives.  May their witness sustain your steps today and tomorrow as you journey along the way of love, of freedom, of justice and of peace.  Amen.