Fr Lombardi: Papal journey a blessing for all Albanians 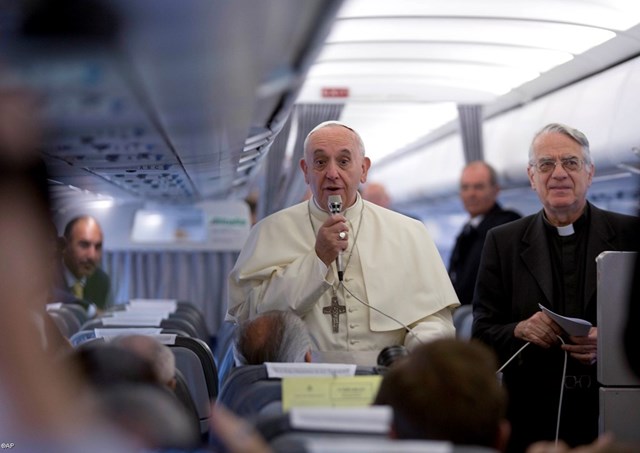 (Vatican Radio) Briefing journalists at the end of a busy morning in Tirana, the Director of the Vatican Press Office  Father Federico Lombardi SJ, answered questions and highlighted a couple of details relating to Pope Francis’s one-day apostolic journey to Albania.

Fr. Lombardi said that during his plane journey en route to Tirana early Sunday morning, the Pope greeted the some 50 journalists on board and mentioned the main themes of the trip which he said were the theme of suffering, of the reality of peace within diversity, and of the importance of dialogue to favour good governance.

And during his car journey on the way from the airport, Fr. Lombardi revealed that the Pope was accompanied by Don Davide Djudjaj - a long-time friend and collaborator of Vatican Radio who is acting as official translator for the Pope in Albania. On the way – he said -  they spoke of three things: first the Pope observed what a young population this nation has in an aging Europe, and how the youth appear to be looking ahead with hope; second the significance of the Eagle represented on the flag – an image he was to pick up again when he said “the eagle flies high but always returns to the nest” reminding Albanians not to forget the nest, not to  lose sight of their  roots; and third he remembered meeting Mother Teresa on the occasion of the 1994 Synod of Bishops. He said he was struck by the power of her interventions at the synod and admired her determination: “I would have been intimidated by her had she been my Superior” he said!

Referring to when the Pope sat to write in the Book of Honour upon his arrival at the Presidential Palace, Father Lombardi revealed that he expressed respect and admiration for the way the noble people of Albania provide witness and live in brotherhood to govern the nation.

Fr Lombardi said the President was very moved by his meeting with Francis and repeatedly expressed his gratitude for this visit underlining its importance for his people. During his private meeting with the Pope the President focused on the harmony between religions which – he said - reinforces democracy and is very important for the nation. He recalled the history of the diplomatic ties between the Holy See and the nation, and as a Muslim he expressed his hope that this journey will be a blessing for all Albanians.

And in fact, Father Lombardi pointed out that also during the celebration of Mass in Tirana there were many Muslims present who wanted to be with the Pope and to receive his blessing.
Father Lombardi said that before the Pope’s arrival in Tirana a gathering of Muslims in a central Mosque had prayed for the success of his visit.

Regarding the gifts exchanged between the Pope and the President, Francis took a copy of the first ever printed missal in the Albanian language in the 16th century.
The President gave the Pope a silver portrait of Pope Clement XI – who belonged to the Albani family, so was traditionally of Albanian origin. On the gift writing read: “the home of the Albanian belongs to God and to the friendly guest”. Therefor – the President said to the Pope: “You are twice welcome!

Father Lombardi also highlighted the fact that during his welcome address to the Pope, the President spoke of the service rendered to the people of Albania by Vatican Radio during the years of persecution – this makes me very happy, he said, as we certainly didn’t tell him to do so!

Regarding the Mass, Father Lombardi said the estimates are that there were from 250 to 300 thousand people present, and he commented on the fact that the reading chosen were all particularly significant for the occasion. He also pointed out that symbolically, amongst those chosen to read at Mass were a visually impaired man, an ethnic Roma girl, and three generations of a family.

Highlighting the fact that the theme of respect between diverse religious denominations is central to this apostolic journey, Father Lombardi said there will be no Jewish representation at the afternoon meeting between religious leaders – only because there are so few Jews in Albania, organisers were not able to put together a representative group. And so will be five representatives of the different religious groups and not six as originally foreseen.

Finally, to the question whether there are heightened security concerns, Lombardi said absolutely not and explained the only reason the Pope is not stopping to chat to people as he so often does when in the Vatican, is because he has a tight schedule and has to stay on time!