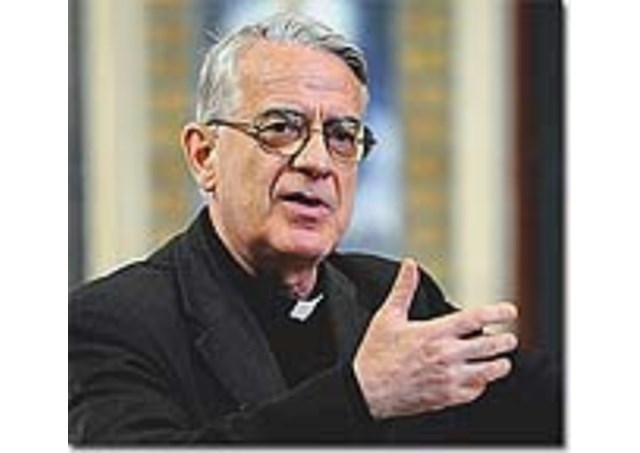 (Vatican Radio) The Director of the Press Office of the Holy See, Fr. Federico Lombardi SJ, briefed journalists on Wednesday regarding the progress of the reunion of the Council of Cardinals, which took place in Rome this week. The major areas of discussion were: the laity, the family, and connected issues; justice, peace, and related concerns.

Fr. Lombardi SJ said that the Council members are making progress toward a new draft constitution for the reorganization of the Vatican bureaucracy, and that a draft introduction to the proposed document had been circulated.

The Director of the Press Office also told reporters to expect important announcements regarding the statutes and membership of the Commission for the Protection of Minors within the next few weeks, and announced that the first meeting of the Commission on Vatican Media will convene on September 23rd, at the Santa Marta residence.

Below, please find the Press Office’s English translation of the remarks of Fr. Lombardi SJ’s remarks.

The Sixth Meeting of the Council of Cardinals began during the morning of Monday 15 September and will end this evening [17 September, 2014]. As usual, the Holy Father was always present at the meetings, except for this morning, due to the Wednesday general Audience.

In the previous meetings, the Cardinals had worked by examining all the Congregations and Pontifical Councils, though they had also assigned a significant amount of time to hearing the referring Commissions on economic and organisational questions (COSEA and CRIOR) and on matters pertaining to the economic Dicasteries.

Work in this area may now be considered complete, following the constitution of the Council and the Secretariat for the Economy. The press conference held by Cardinal Pell in July focused on the results of this work and on the initiation of the activities of these new organs. Therefore, in this meeting the Council of Cardinals resumed work on the other Dicasteries.

In the meantime, several contributions have been prepared by various members of the Council on the different issues within their sphere of competence, which were proposed or presented to the Council.

During these days, the Council focused on two principal “hotspots”: the first includes the themes of the laity and the family. It is a very broad area, encompassing many issues, including for instance the role of women in society and in the Church, youth, childhood, or matters related to lay associations and movements, and so on. The second comprises themes linked to justice and peace, charity, migrants and refugees, health, and the protection of life and ecology, especially human ecology.

As can be seen, the discussions therefore involved many of the major issues that fall within the competences of the current Pontifical Councils, and how to face them in a coordinated and integrated fashion.

The Council of Cardinals, as we are aware, does not make decisions, but formulates proposals for the Pope, who certainly intends to consult in further depth, also with regard to the various Dicasteries, involving those in roles of responsibility. Therefore, the Council’s proposals will be studied further, and it is to be expected that the Pope will speak about them, for instance, during the meetings with the Heads of the Dicasteries, which are convoked regularly and will certainly take place in the coming months.

A draft Introduction for the new Constitution was also drawn up and distributed.

In order to speed up this new phase in the work of the Council, the coordinator Cardinal Maradiaga has prepared an overall plan to facilitate the organisation of the contributions and reflections already offered during the previous meetings and the integration of new ones. It may be assumed that, with the next two meetings of the Council (9-11 December 2014 and 9-11 February 2015), the draft Constitution will reach an advanced stage of preparation, making it possible for the Pope to proceed with further consultations.

With regard to the Commission for the Protection of Minors, the appointment of the Secretary, Msgr. Robert Oliver, has been made public during recent days. In the next few weeks other very important aspects will be specified regarding the Statutes and further members of the Commission. It is expected that these will be clarified at the time of the next meeting of the Commission itself, scheduled for early October (4-5).

With regard to the Commission on Vatican media, chaired by Lord Chris Patten, the first meeting will be held from 22-24 September at the Domus Sanctae Marthae. As a first meeting, it will be dedicated primarily to drawing up a framework for the common base of information necessary to enable the work of the members (several of whom are from contexts external to the Vatican), the planning of the work to be done over the coming months, and the method to be used. The Commission itself, during its first meeting, will establish its own strategy of communication.

Therefore, interviews or communications will not be given prior to the meeting.