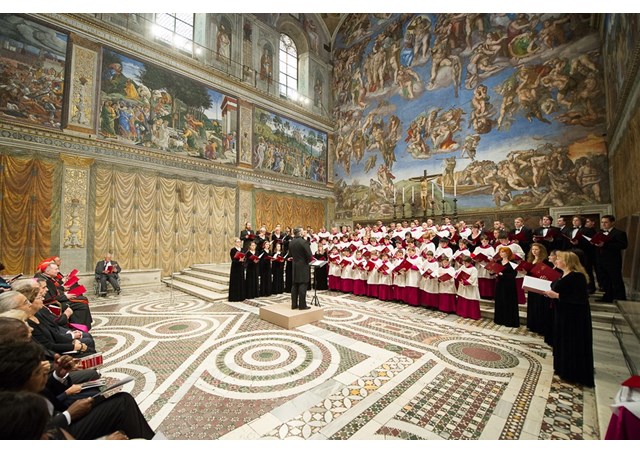 (Vatican Radio) The Pontifical Sistine Chapel Choir, known as the Sistine Choir, is set to perform for the first time in Macao, Hong Kong and Taipei.

The concerts are being made possible through the Hong Kong Institute for Promotion of Chinese Culture, in collaboration with the Coro Perosi of the Diocese of Macao and the Taipei Philharmonic Foundation. By sharing the rich musical traditions of East and West, these concerts aim to promote cultural exchange through art and music, thereby creating new channels of communication and communion.

The concerts, entitled “Reverberating Heavenly Tunes in Greater China”, will include pieces from notable composers such as Giovanni Pierluigi da Palestrina, Orlando di Lasso, Gregorio Allegri and Lorenzo Perosi, whose works, historically, have been found in the repertoire of Papal celebrations.

In addition, on 21 September at 11:00 in the Cathedral of Hong Kong the Sistine Choir will assist, with the authorization of the Cardinal Secretary of State, at the Sunday celebration of the Eucharist. His Eminence Cardinal John Tong Hon will preside.

The Pontifical Sistine Music Chapel Choir (Sistine Choir) has its origins in the former Roman Schola Cantorum and for centuries has preserved the musical traditions of the Church. It is composed of trained vocal musicians who sing at Papal liturgies and at other celebrations desired by the Holy Father. Immediately after the Pope’s return to Rome in 1378 from exile in Avignon, France, a need to provide for adequate sacred music was felt. Following his election on 9 August 1471, Pope Sixtus IV gave specific direction to this musical renewal by creating his own College of Cantors, which would later become the Sistine Choir. With the intention of providing more stable leadership to the Pontifical Sistine Music Chapel Choir, Pope Pius VII appointed Giuseppe Baini as director (1818-1844). He was followed by Domenico Mustafà (1848-1902), Lorenzo Perosi (1902-1956), Domenico Bartolucci (1956-1997) and Giuseppe Liberto (1997-2010). The Sistine Choir has been under the direction of Massimo Palombella since 16 October 2010.